Enthralled and Falling in Love; Disenthralled: What’s That?¹

I imagine that most of us, at one time or another – be it a first puppy love, maybe a crush on that teenage heartthrob, possibly your spouse and longtime lover – most of us have been enthralled with someone. Fascinated, maybe writing their name over and over when we were supposed to be studying for that big test. Anyway, I have been. I am now enthralled with my husband, David.

But what does “disenthralled” mean? In a recent issue of The Christian Century, Editor Peter Marty wrote his opening editorial: “Becoming disenthralled.” (See lead photo.) He writes that he has seen that word only once, written by Abraham Lincoln in his annual address to Congress in 1862. Apparently, Lincoln delivered that address one month before the Emancipation Proclamation took effect, and in it, he tried to push all Americans to “rethink their views on slavery.” The president said the following:

We can succeed only by concert. It is not, “Can any of us imagine better?” but, “Can we all do better?” ... The dogmas of the quiet past are inadequate to the stormy present. The occasion is piled high with difficulty, and we must rise with the occasion. As our case is new, so we must think anew and act anew. We must disenthrall ourselves, and then we shall save our country. ... We know how to save the Union. ... We, even we here, hold the power and bear the responsibility.

Marty points out that Lincoln viewed the whole nation as able to rise to the occasion and “break its hypnotic attachment to ideas once considered acceptable.” The nation needed to “break free of its enchantment with ideas about the institution of slavery that were no longer relevant and never deserved to be true.”

This brings me to the life and death of Jonathan Daniels, who died in 1965 during the Civil Rights protests in Selma, Alabama. I bring him up because I believe his spirit was pre-figured in Lincoln’s appeal to our better selves and the nation to widen its vision of racial justice in this country. I believe that spirit can also animate us in our own day. If you haven’t heard of Daniels before now, let me briefly tell his story and then try to make the case for his relevance today.

Daniels graduated from Virginia Military Institute some 60 years ago, valedictorian of his class. He went on to become a graduate student at Harvard, but after a religious conversion experience he decided instead to attend The Episcopal Theological School in Cambridge, Massachusetts and study for the Episcopal priesthood. To make a long story short, after the beating of peaceful marchers in March 1965 in Selma, Daniels and others traveled to Selma to work for civil rights. It was there that he lost his life and is honored to this day as a martyr for the faith.

On Feb. 16, 2019, my good friend and historian, Charles Bryan, wrote a piece about Daniels in the Richmond Times-Dispatch. (See the second photo of Daniels below.) Let me quote a bit from Charlie’s article to set the scene of Daniels’ martyrdom:

In August 1965, Daniels and 29 protesters were arrested in Fort Deposit, Alabama, for demonstrating in front of whites-only stores. Transported in a garbage truck to the jail in nearby Hayneville, most of the demonstrators were detained for six days in stifling cells without air-conditioning.

Finally released without explanation and with no transportation back to Fort Deposit, Daniels, [ a Catholic priest and] two teenagers, Joyce Bailey and Ruby Sales, took off on foot. Parched by the blazing Alabama sun, the four stopped at a nearby general store to buy soft drinks. As they approached the door, they were confronted by an angry Tom Coleman holding a shotgun. Coleman, a former deputy sheriff, pointed the weapon at Sales, and shouted, “Leave or I’ll blow your damn brains out!” Daniels shoved the teenager out of the way, just as Coleman’s gun discharged, hitting the seminarian full-blast in the stomach. He died instantly. [Eventually Coleman was found innocent of murder by an all-white jury, who deemed his act one of self-defense.]

In the papers and letters Daniels left behind during his stay in Selma, he wrote that the faith and vision that brought him there had not changed, but grown. That “black men and white men are all indelibly and unspeakably one.”

I think this Jonathan Daniels story is relevant today, and that relevance is underscored by Peter Marty’s argument at the end of his editorial. Marty asks the question, What is there today that we need to disenthrall ourselves of – in addition to the racism and its effects still endemic in our society? He answers by suggesting that it is perhaps our national love affair with guns. He writes:

... liturgies of devotion reverberate after every mass shooting. The gun lobby promotes what Marilynne Robins calls “a recipe for a completely deranged society ... [one where] we should all go around capable of a lethal act at any moment.” ... Legislators hold the power and bear the responsibility for enacting laws of common sense (e.g., limiting access to rapid-fire assault rifles explicitly designed to hunt humans) ... [but] many lack the moral courage or conscience to do so.

When a right becomes an acute threat to societal health and well-being, the time would seem ripe for some reevaluation. But first we must disenthrall ourselves – only then might we save our country.

Neither I nor Peter Marty are asking our lawmakers at the federal and state levels to become martyrs in the sense that Jonathan Daniels embraced. But they and those who vote for them might try to widen their vision and imagine a nation with less violence and fewer gun deaths occurring every day on our city streets and rural roadways ... even, perhaps, while risking their own elected offices in the process.

The late Congressman John Lewis – who recently was awarded VMI's Jonathan Daniels Award recognizing those who give service to humanity, and whose beating in Selma galvanized Daniels to action – said that Daniels “gave his life to redeem not just the soul of Alabama but the soul of a nation. May his selfless and courageous example redeem us to achieve the decency and nobility of which we are capable.”

1. Daniel’s story found here is an excerpt from a piece I recently wrote for St. Martin’s newsletter, The Cloak. 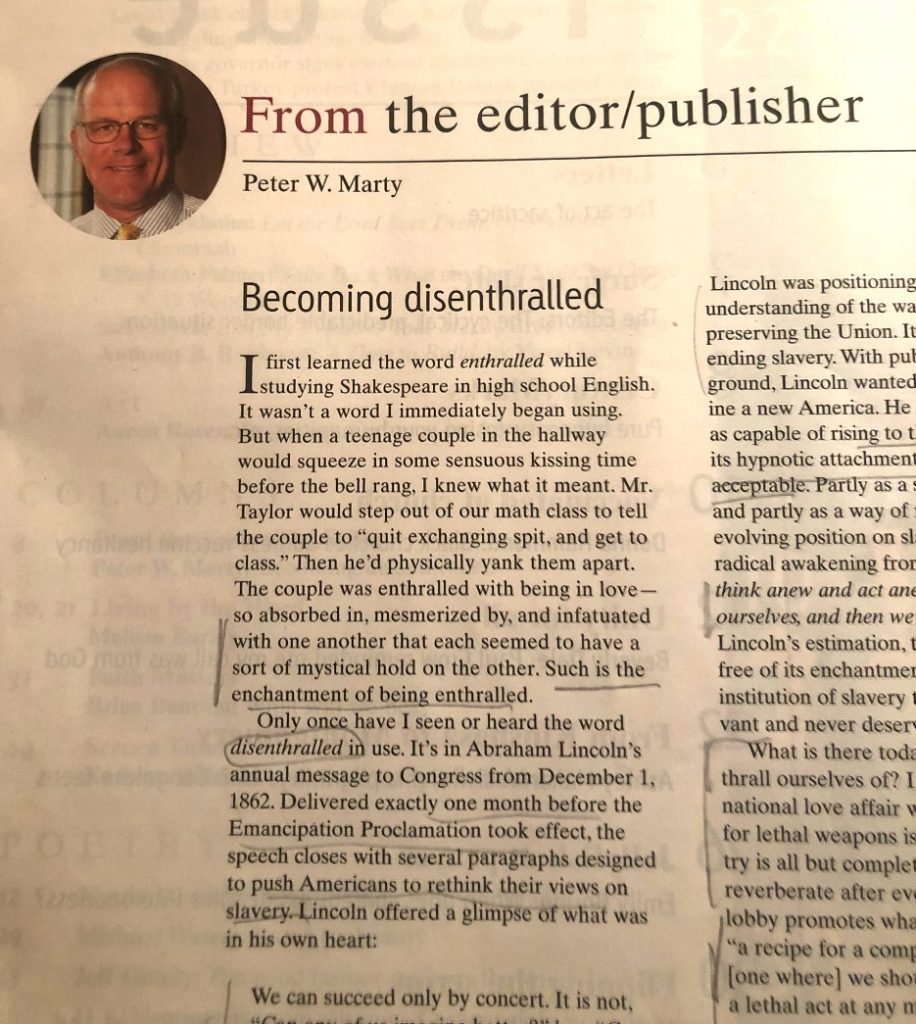 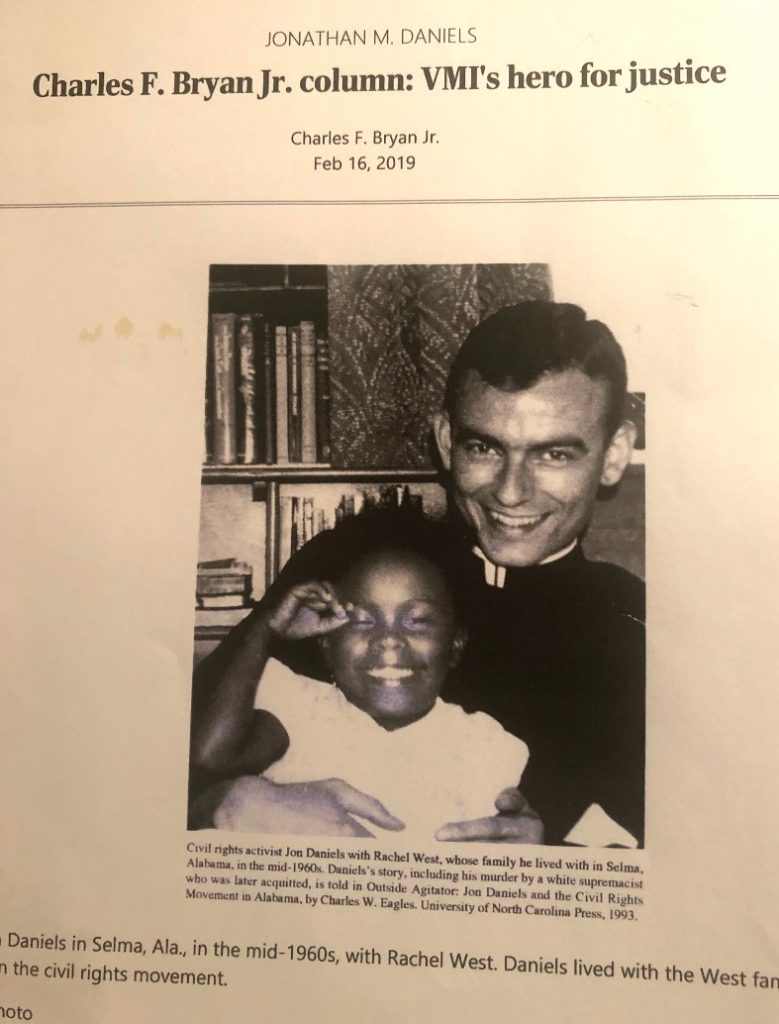