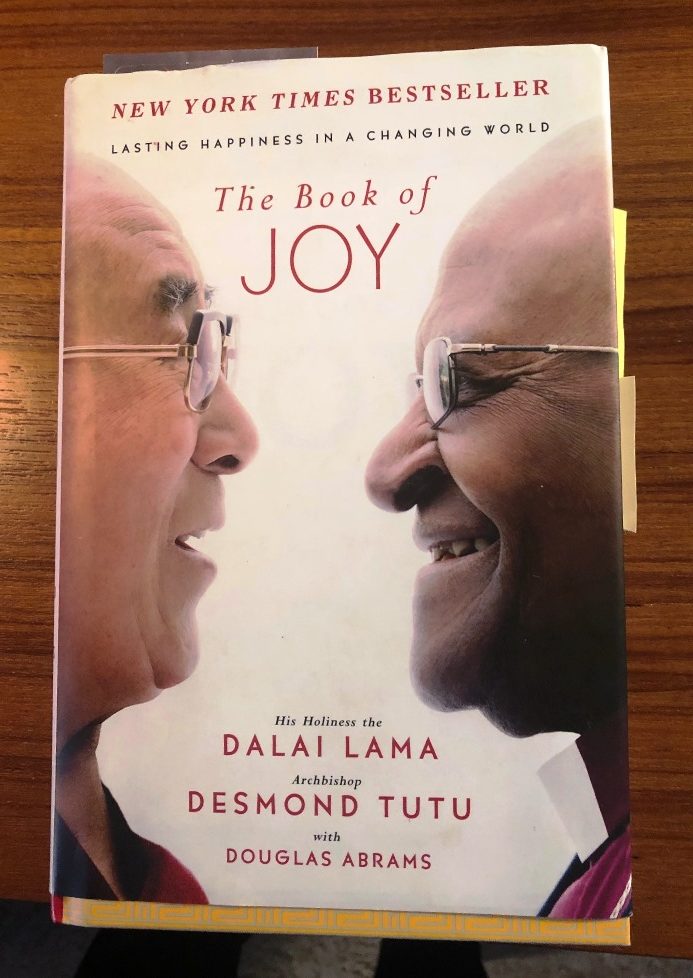 Archbishop Desmond Tutu: A Good Man, a Saint in His Own Time and Ours

I met Archbishop Tutu when I visited South Africa in 2016. He was a Patron of Volmoed – a wonderful conference and retreat center – from 1990 to 2021. I was staying at Volmoed while visiting my friends John and Isobel De Gruchy. You have met John, a well-known writer and theologian, and Isobel, a very talented artist and poet, many times in my past blogs. But I actually “met” Tutu earlier here in Richmond, Virginia, when he spoke at the annual Richmond Forum, and following my visit to South Africa in The Book of Joy, written by Douglas Abrams in 2016. (See lead photo.) Douglas, a co-writer and editor of Tutu’s over the years, was present for the week that Tutu and the Dalai Lama spent at the latter’s refuge in Dharamsala, India, in celebration of His Holiness’ 80th birthday. And so I, along with most of the world, have followed and been inspired by the Archbishop’s life over the decades. (More about The Book of Joy later.)

You may remember that my last blog was titled, “We Can Be Amazingly Good! Seriously! And When You See Goodness in Front of You, It’s Awesome.” In it I listed a few people as examples of goodness – but if I had to do that blog over, Desmond Tutu would be at the top of the list. The day after he died, The New York Times ran several articles about his life and legacy. (See the second photo below, from the front page of that issue.) They were amazing testimonies to his ministry over a long lifetime.

In the front page article, “Archbishop Whose Voice Helped End Apartheid,” Marilyn Berger points out that Tutu’s words and actions in his fight against grave injustice won him worldwide recognition – including receipt of the Nobel Peace Prize in 1984 for his championing of nonviolence for the sake of that cause. After Apartheid ended, Tutu – as chair of the Truth and Reconciliation Commission – fought for an honest accounting of past crimes, urging amnesty to the perpetrators of past horrors and arguing for restorative rather than retributive justice. In other words, in place of punitive retribution, Tutu proferred to restore to victims what was lost during Apartheid. We might argue about how well that aim was achieved, but Tutu championed that principle nonetheless. Berger notes the following:

As the author of a 1999 book titled “No Future Without Forgiveness,” he was generous in forgiving his enemies, and when the de Klerk government took steps in 1989 toward ending apartheid, Archbishop Tutu was among the first to welcome the prospect of change. ... Although Archbishop Tutu, like other Black South Africans of his era, had suffered through the horrors and indignities of apartheid, he did not allow himself to hate his enemies. When he was young, he said, he was fortunate in the white priests that he knew, and throughout the long struggle against apartheid, he remained an optimist. “Justice, goodness, love, compassion must prevail,” he said during a visit to New York in 1990. “Freedom is breaking out. Freedom is coming.”

Jumping ahead to 2016 and getting back to The Book of Joy as promised, I did read this book when it first came out. But I am rereading it now because its messages seem as timely as ever. These past two years living with this pandemic have been hard on everyone, and so a little joy may be just what the doctor orders.

As I wrote earlier, Tutu came to visit the Dalai Lama in Dharmsala, India, to help celebrate the Dalai Lama’s 80th birthday. Tutu was suffering from his prostate cancer’s recurrence and subsequent treatments thereof, but nevertheless the two old friends rejoiced in each others’ presence. In fact, not only because of His Holiness’ age but also because of the disease that appeared to be relentless in Tutu’s failing health, perhaps their time together seemed more precious than ever.

In reviewing the book’s table of contents – broken down by each day’s topic – day 1 is devoted to the nature of joy, days 2 and 3 to obstacles that work against joy, and finally days 4 and 5 to addressing what Douglas calls the “Eight Pillars of joy – perspective, humility, humor, acceptance, forgiveness, gratitude, compassion, and generosity.”

In my own writing – both in books and blogs – I have discussed some of these pillars. Let me just give you an example of the flavor The Book of Joy provides of these two old friends’ insights on a couple of them: gratitude and compassion. On gratitude, the Dalai Lama reminds us of what we all know so well. “Impermanence ... is the nature of life. All things are slipping away, and there is a real danger of wasting our precious human life. Gratitude helps us catalog, celebrate, and rejoice in each day and each moment before they slip through the vanishing hourglass of experience.” (p. 249) And with respect to compassion, Tutu observes that “when we think of alleviating other people’s suffering, our own suffering is reduced. This is the true secret to happiness. So this is a very practical thing. In fact, it is common sense.” (p. 254)

In rereading this book, I am struck by how timely it is not only concerning the worldwide scene of pandemic suffering, but also in our own national scene of bitterness and division. And speaking to that latter condition as if he made the following observation today, Tutu writes the following about generosity:

We have been brought up to think that we have to obey the laws of the jungle. Eat or be eaten. We are ruthless in our competiveness. So much so that now stomach ulcers are status symbols. They show just how very hard we work. We work hard not only to supply our needs and the needs of our families, but we are trying to outdo the other. We have downplayed the fact that actually our created nature is that we are made for a complementarity. We have become dehumanized and debased. As Martin Luther King Jr. said, “we must learn to live together as sisters and brothers, or we will perish together as fools.”

Yes indeed, and amen, brother. As my friend John de Gruchy said in his statement honoring the Archbishop at Volmoed this week, Tutu was a “pastor of pastors whose love and compassion has embraced us and people everywhere in his witness to the love of God” in the person of Jesus Christ. ... May Volmoed be a place that helps fulfill his dream of justice, reconciliation and peace, a community of forgiveness and love, and a witness to the joy and hope that he embodied among us.”

Again – we in the United States and all over the world “must learn to live together as sisters and brothers, or we will perish together as fools.” Martin Luther King Jr. and Desmond Tutu both embodied that truth in their lives and in their deaths. That is the deep truth that humankind learns over and over, and now it is our turn ... before it is too late. 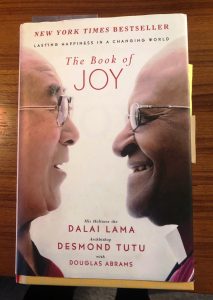 The Book of Joy 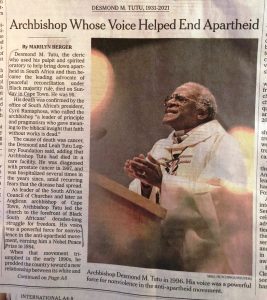