COVID-19 and Hard Times:
A Cry From the Heart

I was going to write about something topical – like the Federal death penalty! But It’s just hard not to write about our ongoing and seemingly endless confinement and fear of contamination that accompanies all moves outside the home. And now of course, the floating sense of vagueness about the current vaccines. Where do you sign up? Who gets it? Where are these vaccination sites that are supposedly being set up and organized? No one seems to know. You call the county health department and can’t get through. You email them and strongly suspect that you are writing a missive that drops out into the ether.

And so here we are. David and I are fine physically as of now – as far as we know. And we remind ourselves that we have no grounds for complaint. None – compared to the loss and misery out there in our own town, in our country, and in the world. But like you I suppose, we do miss family and friends, the freedom to enjoy our lives with outings and travel, the loss of companionship that FaceTime simply does not replace.

A couple of weeks ago I pulled off of my bookshelf an old book that’s been there for a few years titled Psalms for Troubled Times by Merrill Morse. (See lead photo.) I’ve been reading one psalm each afternoon when I have some quiet time – chanting the psalm actually. And then reading the narrative that Morse pairs with each of the Old Testament poems. Out of the blue one morning while deciding to get out of bed (probably around 6 a.m.), I remembered something I first read when I was in seminary years ago titled “The Prayer of Yosl Rakover.” What I remember learning in seminary was that this prayer was found scribbled on a scrap of paper by a Jew who was being led off to certain death in either Auschwitz or some other Nazi death camp. I remember being very moved by its words and underlying cry of faith despite the heartsick anger and despair expressed in the prayer’s language. I also remember using excerpts of that prayer in a sermon or two over the years.

It was only later that I learned the true history of that “prayer.” Turns out it was a literary fiction – in fact a short story, written in 1946 by a young Jew named Zvi Kolitz for a Yiddish newspaper. At the time he was living in Buenos Aires, where apparently he had gone to raise money for the Jewish underground in the struggle to found the State of Israel.

Well, going to my amazing bookshelf in my study, there I found a slim volume titled Yosl Rakover Talks to God by Kolitz, translated from the German and published by Random House in 1999. (See second photo below.) Let me give you a flavor of the long prayer that has remained in my brain all these years.

On page 23 of this little volume, Kolitz writes: “I die at peace, but not pacified, conquered and beaten but not enslaved, bitter but not disappointed, a believer but not a supplicant, a lover of God but not His blind Amen-sayer.” Then supposedly Rakover, talking to God, tells the story of a Jew who escaped the Spanish Inquisition with his wife and child only to lose both in a stormy accident at sea. This unnamed Jew who survives the storm rails at God as he struggles onto a rocky desert island. And this is the prayer I remember, the one that the fictional Rakover made his own as he prepared to die at the hands of the Nazis:

God of Israel, I have fled to this place so that I may serve You in peace. ... You, however, are doing everything to make me cease believing in You. But if You think that You will succeed with these trials in deflecting me from the true path, then I cry to You, my God ... that none of it will help You. You may insult me, You may chastise me, You may take from me the dearest and the best that I have in the world. You may torture me to death – I will always believe in You. I will love You always and forever – even despite You.

Here, then are my last words to You, my angry God: None of this will avail You in the least! You have done everything to make me lose my faith in You, to make me cease to believe in You. But I die exactly as I have lived, an unshakeable believer in You.

Praised be forever the God of the dead, the God of vengeance, of truth and judgment, who will soon unveil His face to the world again and shake its foundations with His almighty voice. ... Hear, Israel! The Lord is our God, the Lord is one. Into Your hands, O Lord, I commend my soul.

Well whoever penned this prayer – apparently Zvi Kolitz in 1946 – it is truly a powerful cry of faith-filled anguish that I believe speaks truth to our human condition over time.

Now I’m not for one minute likening the experience of our pandemic – for most of us who now have the luxury of writing and reading blogs – to the experience of the Holocaust and its survivors and victims. But certainly for some of us, these are times that try our souls. There is in fact innocent suffering all around us and sickness and death that lurk just outside our doors. So let me turn back to Morse’s book and end this blog with a few lines taken from Psalm 102 and Morse’s reflection on that psalmist’s cry.

“O my God,” I say, “take me not hence in the midst of my days,
thou whose years endure throughout all generations!”

Morse notes that there is a bit of selfish logic to this human plea, a subtle railing at God who has plenty of days: “What difference does it make to you, O God, if I get a few more years of life!” Morse also sees a certain hope of redemption underlying this cry. He writes:

There is hope, too, in the larger context, for we belong to a whole community of people who know what it is to suffer. In the still-unfolding cosmic drama the full meaning of our lives and of suffering itself will become clear as we are absorbed into a greater destiny than we can now comprehend.

But for now, we may rightfully plead our cause and make our hurts known. In fact, we must, because not to do so is to risk diminishing ourselves altogether. Our hearts need to speak in times of sorrow as well as joy, and when they do, we ourselves need to listen.

Yes I think we ourselves need to listen. And hear – nevertheless – the faith that lives at the heart of our cry. 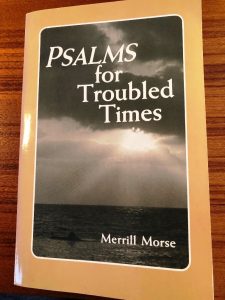 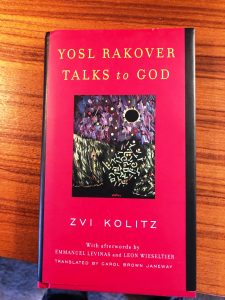