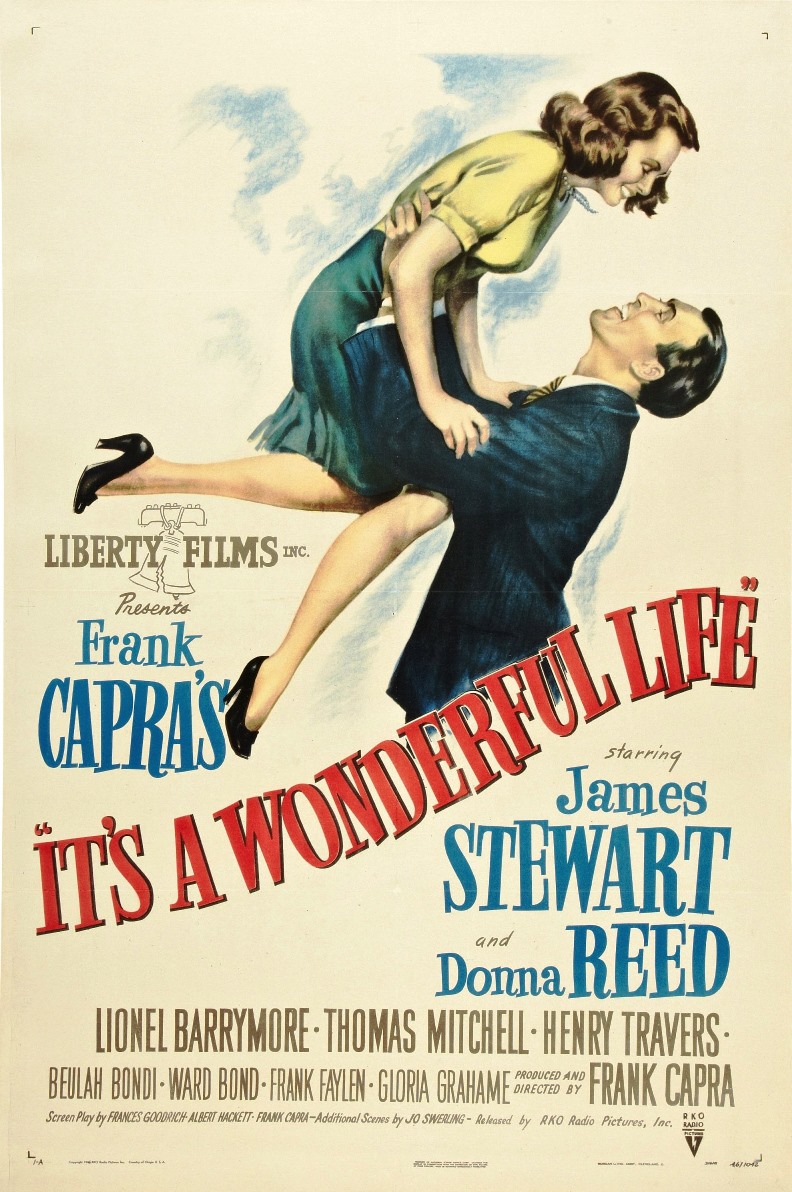 It's a Wonderful Life:
Shaping Each Other for Good, and Be Grateful

Home alone Christmas week, David and I again observed the annual ritual of watching both “It’s a Wonderful Life” with Jimmy Stewart and Dickens’ “A Christmas Carol.” So there we were, sitting in our chairs by the fire watching these two venerable productions, and both of us had tears in our eyes by the last scene in each – Ebenezer Scrooge’s conversion to his better self, and Stewart’s character, George Bailey, realizing the differences he made in the life of others while he was alive.

Both of these iconic stories are morality tales: stories of conversion and redemption with both protagonists finally coming to see the goodness, the truth and the beauty that had really surrounded them in their lives – the goodness that speaks through every life if we just had eyes to see and ears to hear. But Jimmy Stewart’s character is actually more complex. So let’s dig a little deeper into that drama, produced by Frank Capra in 1946, and try to uncover its deepest meaning, turning over this gem like a fine diamond with many facets. What is the real meaning of his narrative and how does it apply to our everyday lives – even living through these dark days of our pandemic? (Please see lead photo and the second photo below.)

If you remember the story, George Bailey, played by Stewart, was already a good man, selflessly giving himself over and over to those in need. Saving his brother’s life when they were children, saving his distraught druggist employer from poisoning a child by mistake, sacrificing his desire for college and an escape from Bedford Falls so his brother could have a real chance for advancement and happiness with his new wife, rescuing his father’s Building and Loan Company after the old man dies in order to help the town’s needy in a time of financial depression, marrying and settling down in a renovated old house in the town that he always wanted to leave.

In fact Bailey was always a good, decent, caring person, until life in the form of the town’s most avaricious, mean-spirited man named Henry Potter, arranged to pull the rug out from under Bailey’s life – including his company, his reputation and his very freedom. As I said above, the narrative is a complex one and I don’t want to take the space to retell the whole thing here. Besides, probably everyone reading this blog knows the story. But the plot comes to a climax when George walks out on his family and, drunk, decides to end it all in suicide by jumping off a bridge. And this is where George’s guardian angel, Clarence Odbody (played wonderfully by Henry Travers), comes into the picture.

Clarence – commissioned by God to save George’s life and rescue him from despair in order to win his angel’s wings – keeps George from committing suicide by materializing and jumping into the river instead. George rescues Clarence, and that’s where the deeper meaning of this wonderful narrative begins. Because Clarence arranges for George to experience what life would have been like in Bedford Falls had he never been born.

Of course the point is this: Every life impinges on and shapes other lives – for good or ill. And following the spirit of Capra’s production, in George Bailey’s case, all of the lives that his life touched, benefitted and flourished because of his goodness and care. He finally understood, with Clarence’s help, that had he not contributed what he gave – to his family and to his town – evil in the personified form of Mr. Potter – would have won, his brother would have died, Mr. Gower would have gone to prison, his beloved wife Mary would have never married or had children, and the town itself would have been swallowed up by Potter’s ambition. Summarizing the ending of Capra’s movie and capturing the scene that made David and me shed tears, is this:

[After actually seeing what life would have been like had he never been born], George races back to the bridge and begs for his life back. The original reality is restored and George, grateful for everything he brushed off in the past, rushes home to await his arrest [for the missing cash the bank examiners have caught, but ultimately caused by Potter’s plotting]. Mary and Billy [his uncle who lost the cash to begin with] arrive after rallying the townspeople, who donate more than enough to cover the missing $8,000. And his arrest warrant is torn up. ... Clarence [who has by now returned to heaven] sends George a note reminding George that no man is a failure who has friends, and thanking him for his wings. At that moment, a bell on the Christmas tree rings, and George’s youngest daughter ... explains that it means that an angel has earned his wings.” (See second photo below.)

We touch and have the power to shape each other into better selves – in many cases unaware of the impact we have on other lives.

In at least one earlier blog and in my book, The Fiction of Our Lives: Creating Our Stories Over a Lifetime, I talk about neuroscientists describing our human brain as an “open-loop system.” On page 87 of that work, I discuss our emotional system, centered in the midbrain region, but with extensive neural connections widely dispersed throughout the higher cortical regions, which depends at least partly on external, social sources to manage itself. In a piece written for The Christian Century, Andrew Root writes, “We rely on connections with other people for our own emotional stability.” We are connected to one another and many times without realizing the impact we have on other lives, impinge sometimes powerfully on others across our life span.”

We are vastly more than a bundle of neurons affecting other brains. But we are that too. A scientist named Le Doux, who wrote Synaptic Self; How Our Brains Become Who We Are, also denies that was all we are. (See third photo below.) He writes “as we begin to understand ourselves in synaptic terms, we don’t have to sacrifice other ways of understanding existence. ... It instead provides a simple and plausible explanation for how the enormously complex psycho-spiritual-social-cultural package of protoplasm we call our self is possible.” (p. 324)

Well maybe we have dived together into Capra’s deepest meaning – although in 1939, when the original story was written, I doubt he had all the neuroscience in mind that helps explain the powerful impact we have on each other. But no wonder David and I cried at the end of the movie – because the final scene capturing human goodness at its finest rang so very true. So let me end this with one stanza from the poem “One winter” by Diane Tucker, recently published in The Christian Century. (See last photo below.)

O Friend of Sinners, Lord of Gentleness,
a single wounded reed you will not break.
The smallest spark of faith receives your Breath
until that living coal ignites a fire
that fuels the sorry soul, that heats the heart.
Kindle every fire that sleeps within us
that in this world we may be warmth and light.

Warmth and light for each other ... as George Baily was to all those he touched. And so may be all. 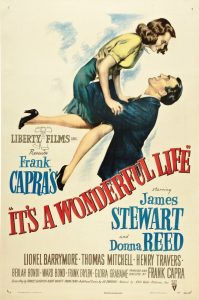 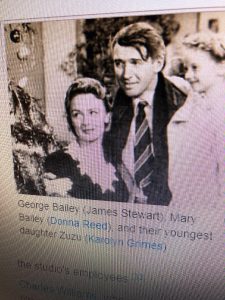 Clarence gets his wings 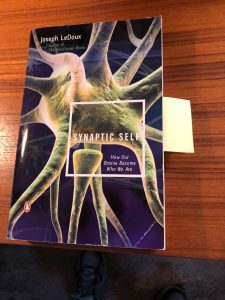 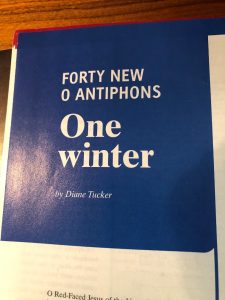