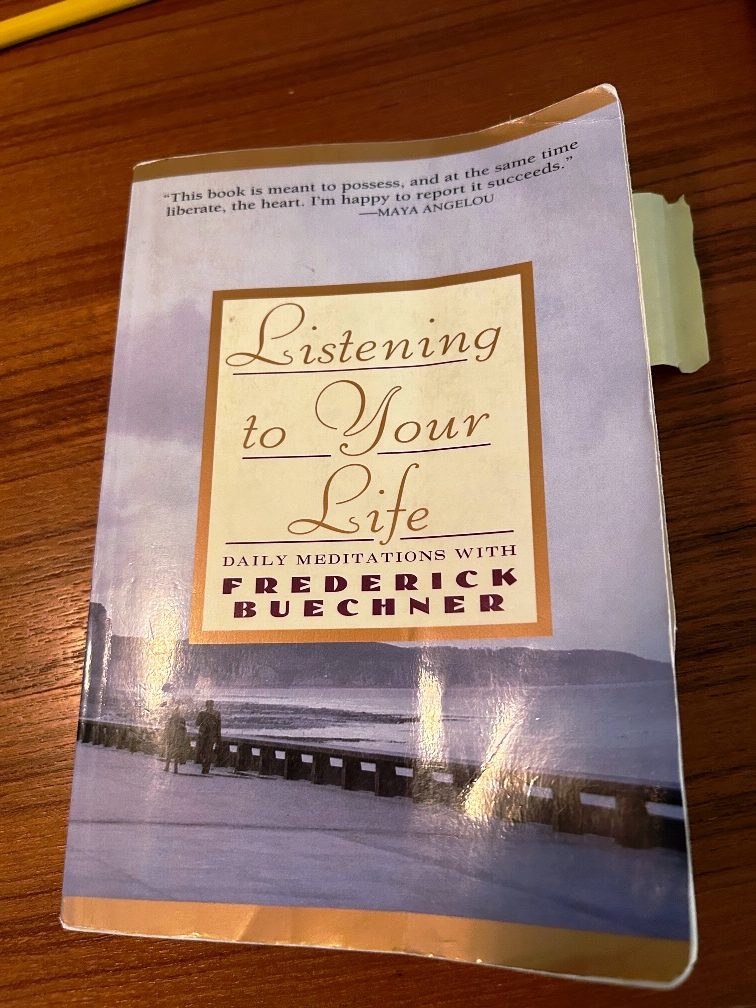 Knowing God through the Lens of Two of My Favorite Writers: Frederick Buechner and James Martin

If you ever happened to wander inside St. Mark’s Episcopal Church in the Museum district of Richmond, Virginia, or into historic St. John's Church on Church Hill downtown – either of them when I was preaching – probably about one-third to one-half of the time, my sermons have been sprinkled with references or quotes from Frederick Buechner (pronounced Beeck'-ner). A retired priest, Monte Pierce, introduced me to his work when I was ordained to the priesthood in Lexington, Virginia, in 1995. Monte gave me Buechner's book titled Listening to Your Life: Daily Meditations with Frederich Buechner. (See the lead photo.) I’ve included Monte’s inside inscription (see the second photo below). Today my bookshelf contains 11 of Buechner’s books I've collected and read over the years, and there are probably a few others here and there around the house.

Buechner died at an advanced old age just this year, and so he and I have traveled together for a very long time. He was both novelist and spiritual writer – a teller of stories who had a way into your heart as he told the Gospel truth as he saw and lived it. He was ordained as a Presbyterian minister but referred to himself as a “minister who writes books.” For decades he was one of the most often-quoted in pastors’ sermons and other spiritual writings, and most recently, after his death, was celebrated in a biography by Martin Copenhaver that appeared in The Christian Century. Copenhaver is a spiritual writer in his own right and was close friends with “Fred” for many years. (See the third photo below.) I’ll return later to that biography that celebrates Buechner’s long and fruitful writing, teaching, and lecturing career over the years. I had the privilege of seeing Buechner and hearing him speak when The Buechner Institute was launched in 2018 at King College (now King University) in Bristol, Tennessee. He was frail when he took the podium to speak that day, so it was clear he had entered his final years. But what a privilege it was to see and hear him.

I’m writing this blog on Oct. 10, so I turned to his entry for this date in Listening to Your Life to give you a flavor for his style. He writes, “The face of Jesus is a face that belongs to us the way our past belongs to us. It is a face that we belong to if only as to the one face out of the past that has perhaps had more to do with the shaping of our present than any other. According to Paul, the face of Jesus is our own face finally, the face we will all come to look like a little when the kingdom comes and we are truly ourselves at last, truly the brothers and sisters of one another and the children of God.”

While I've been reflecting on my life with Buechner and pulling his books off my shelf, my breakfast table reading has continued to be James Martin’s Learning to Pray (fourth photo below; also a subject of a recent piece I wrote for the Musings & Writings page here.) I recently finished a section in Martin's book concerning how we come to “know” and learn about God – and immediately I made the connection with Buechner’s writings and why his books have affected me so deeply. Three of the ways we can know God seem to speak to my time spent with him over the years, and reflect the depth and core of his meaning in my life. So please bear with me while I list these three ways and give brief examples of knowing God through Buechner’s writings.

First, one of the ways to come to know God in your life is through other people’s experience of God – what is referred to as faith sharing. Certainly most, if not all, of Buechner’s writings are his own stories of his very human life and experience with God’s working in and through him.

A second way to know God, according to Martin, is to read about the life of the saints. In his book titled Peculiar Treasures: A Biblical Who’s Who (fifth photo below), Buechner travels from A to Z with a short story about Old and New Testament figures. Even if you’re not a Biblical scholar, you've probably heard the story of Jonah and the Whale. As Buechner explains:

Within a few minutes of swallowing the prophet Jonah, the whale suffered a severe attack of acid indigestion, and it’s not hard to see why. Jonah had a disposition that was enough to curdle milk.

When God ordered him to go to Nineveh and tell them there to shape up and get saved, the expression on Jonah’s face was that of a man who has just gotten a whiff of trouble in his septic tank. ... The Ninevites were foreigners and thus off his beat. ... Far from wanting to see them get saved, nothing would have pleased him more than to see them get what he thought they had coming to them. ... In a desperate attempt to get himself out of the assignment, he got himself swallowed by the whale. But with a little more prodding from God, did what he’d been told. Having succeeded in saving the Ninevites, Jonah sat down [under a leafy castor oil plant to shade himself from the blistering sun]. It was an opening that God could not resist [causing the castor oil plant to shrivel up to the last leaf]. Jonah getting all upset, God pretended to misunderstand what was bugging him.

“Here you are, all upset out of pity for one small castor oil plant that has shriveled up,” God said. “So what’s wrong with having pity for this whole place that’s headed for Hell in a handcart if something’s not done about it?” ... It is one of the rare instances in the Old Testament of God’s wry sense of humor, and it seems almost certain that Jonah didn’t fail to appreciate it.

Finally, Martin lists a third way of knowing God: through reading scripture. In his book Telling the Truth: The Gospel as Tragedy, Comedy, and Fairy Tale (sixth photo below), Buechner shares truths about us humans and the story of God’s dealing with us in a plainspoken and honest way that is, in fact, a slap in the face to force you to look. Let me give you a flavor of this truth from a few paragraphs at the beginning of the book, and then we’ll wind this up. He writes:

The Gospel is bad news before it is good news. It is the news that man is a sinner, to use the old word, that he is evil in the imagination of his heart, that when he looks in the mirror all in a lather what he sees is at least eight parts chicken, phony, slob. That is the tragedy. But it is also the news that he is loved anyway, cherished, forgiven, bleeding to be sure, but also bled for. That is the comedy. And yet, so what? ... He either doesn’t believe them or doesn’t want them or just doesn’t give a damn? In answer, the news of the Gospel is that extraordinary things happen to him just as in fairy tales extraordinary things happen. For example, St. Paul sets out a hatchet man for the Pharisees and comes back a fool for Christ. It is impossible for anybody to leave behind the darkness of the world he carries on his back like a snail, but for God all things are possible. ... All together they are the truth.

Let me end with a couple of lines from Copenhaver’s Christian Century biography of Buechner:

One of Buechner’s overarching themes is this: Listen to your life. See it for the fathomless mystery that it is. In the boredom and pain of it no less than in the excitement and gladness: touch, taste, smell your way to the holy and hidden heart of it because in the last analysis all moments are key moments, and life itself is grace.

And so this man has touched my life over the years. I recommend that you take up some of his books and see, taste, and take in his truth and wisdom for your own life! I guarantee you won’t regret it and you’ll see yourself reflected in the truth of his words. 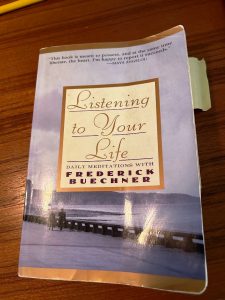 Buechner's Listening to Your Life 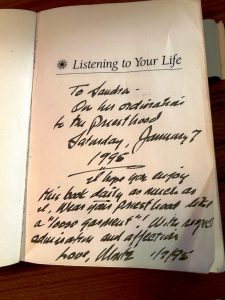 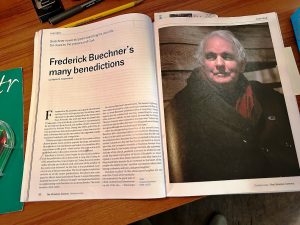 Copenhaver's biography of Buechner in The Christian Century 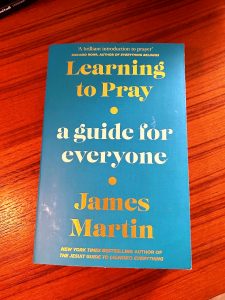 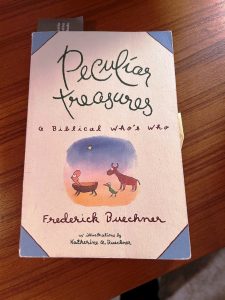 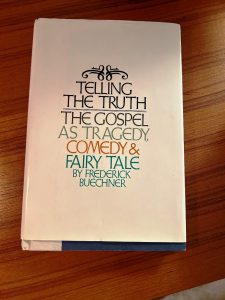