Life in a Broken Time:
Where the Light Shines Through

Someone once said something like “we are all broken, and where the cracks occur, that’s where the light shines through.” And for me, one of my human sources of light, a dear friend, has just left this world for the next and better one. In any case, that is my hope; that is my faith. As I said in my last blog, this without doubt is a sad time. Sad for each of us; sad for our country; sad for the world. And now this week, I have had sadness upon sadness descend upon me and on some others who were part of a long-held friendship circle. Because our friend Anita died this past Tuesday night, and thus our world has lost one source of light in our lives. (See lead photo: Anita is second from the right at our monthly luncheon. The second photo below shows Anita walking down the aisle of St. John’s Church here in Richmond.)

Let me shift for a minute or two, and maybe this will all come together by the time I finish. I started to think about this blog last week, of course in the middle of the lockdown and such. David Brooks, one of my favorite columnists for The New York Times, wrote an op-ed piece titled “The Age Of Coddling Is Over” (Friday, April 17, 2020; see third photo below). Brooks started out noting that today’s kids have been raised, for the most part, by overprotective parents – metaphorically expressed as “helicopter moms.” He points out that, in his opinion and that of others, sheltering kids from life’s hard knocks has been a disaster: “This overprotective impulse doesn’t shelter people from fear; it makes them unprepared to deal with the fear that inevitably comes. Suicide rates are way up, depression rates have skyrocketed, especially for girls. ... More than a quarter of all doctor visits now end with a prescription for an anti-anxiety medication, like Xanax or Valium.”

Brooks concludes by telling his readers that this virus pandemic is another “reminder that hardship is woven into the warp and woof of existence. Training a young person is training her or him to master hardship, to endure suffering and, by building something new from the wreckage, redeem it.” Which brings me back to my friend Anita.

For those of you who have read my book, Flourishing Life (Cascade Books, 2012), at one point in it I feature three persons I have admired greatly because they all rose from the ashes of hardship and flourished despite all the odds. Two of them were personal friends: My friend Charlie, who fought against Parkinson’s disease to create a productive life nonetheless, and who is still fighting against the odds to this day – and Anita. Since we have just lost Anita, let me share a bit from an interview I had with her in preparation for my book.

Anita’s first husband died fairly early in their marriage and she was left to raise three boys by herself, which she did, doing the best she could to be both father and mother to her sons. At 42 she took it upon herself to become a pilot; and her small plane lost cabin pressure, Anita lost the sight in one of her eyes. (It's a disease called Eales disease.) When I asked her if she was devastated by her loss of vision and the resulting loss of depth perception, she said no, she soon took it all in stride. “What else could I do? And I could still see ... and read!”

In 2003 Anita lost her second husband, Jonathan, a psychiatrist who died of Alzheimer’s disease. Shortly after that her middle son, Peter, had a crippling stroke ... another hardship in her long life. But she concluded our book interview this way:

Or you can bitch about them the rest of your life and make yourself miserable. There is something to acceptance. Life tosses you the proverbial lemon once in a while. You do the best with what you’ve got. It scares me when people don’t accept the reality of life. In every life, darkness happens and it’s not the worst thing. ... In the meantime, life is filled with surprises and joys that maybe you can only appreciate the joy against the darkness. Appreciating the light against the black surround. There is a future. It may be not what I expect, but there is another life in another dimension. It’s not something to be feared. It’s going to be a good, joy-filled one. Like I said. I am the luckiest person alive. (pp. 72-73)

So maybe it is true that you cannot experience hope without knowing the pain of loss; and you cannot experience deep joy without knowing some sorrow along the way. Philosophers and other wise people have observed these truths and, perhaps in your own life, you know these thoughts ring true. Later in my book, I offer this observation: “In addition to whatever evolutionary advantage the limbic-based positive emotions give us, perhaps most if not all of them – hope, forgiveness, love, compassion, gratitude – function as antidotes to loss and sorrow.” (p. 87)

Well folks, this isn’t 2012 when I wrote Flourishing Life; this is 2020, our time of darkness and challenge. But as someone has said, “soon, if lucky, we will return to some version of our previous freedoms. And if lucky ... we will do the things we so want to do now. ... Wiser for the jolt, we will take our time before taking all we’ve been granted for granted again” (Neil King, The New York Times, April 22, 2020).

Against the pain, against the darkness, and through the cracks of our broken world, the light shines through. And I believe a major source of that light is the light that shines from the faces of others we love. For me, one source of light that shone against the dimness of challenge and sadness over the decades was Anita. And the memory of her and all we shared over the years still sheds light on these challenging times.

So think about those who have touched you or who touch you still. And give thanks for their light that has shown on your path, guiding your steps through your own perilous times. And give thanks.

Anita at luncheon (second from right) 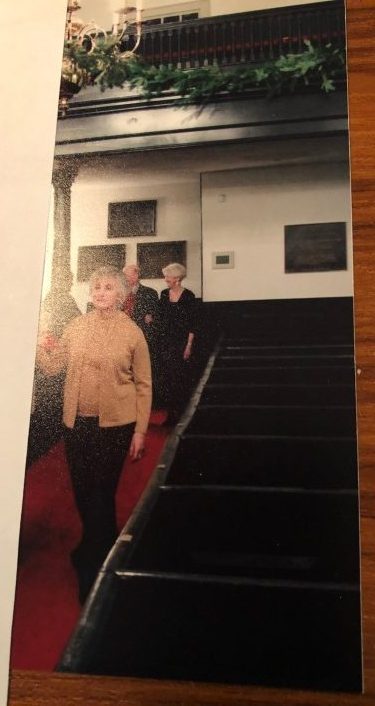 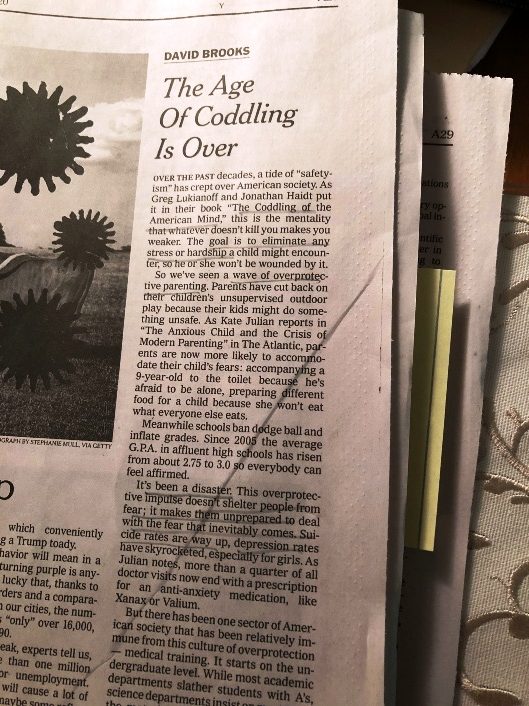 Brooks' "The Age of Coddling is Over"