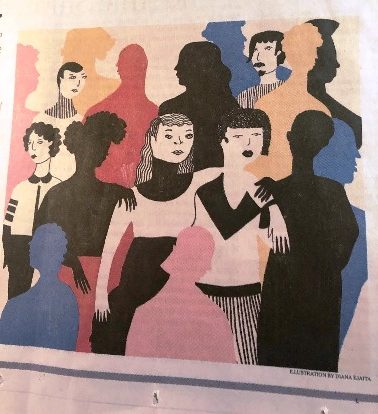 Art from Kate Murphy's op-ed in The New York Times

Life’s Priorities: How the Pandemic and Life Itself Changes Them

When I was a graduate student in psychology at Indiana University-Bloomington, there was a sociologist on the faculty named Frank Westie. He carried out a questionnaire study, and to this day I might be able to find the manuscript somewhere in my files. (And my apologies to Prof. Westie if I misremember some of the study details.) But the gist of his study was this: He sent out a questionnaire to sociology graduate students and, perhaps, assistant professors (those just starting out in the field), asking them how they envisioned themselves down the line in their peak career. The vast majority saw themselves as at least nationally famous social scientists – maybe even internationally well-known.

The participants then were asked to name the five past presidents of the American Sociological Association – those who had actually reached the pinnacle of their careers, the top of the professional line. And generally speaking, almost none of the participants could think of a single name on the presidential list. Lesson: When you start out in your career, you think you are going to make a big splash. And when you get to the end and even if you reach the top, you're lucky if anyone even remembers your name.

I thought of Westie’s study again last week as I was reading Charles Blow’s musing titled “My Second Phase of Adulthood” (The New York Times, April 19, 2021: see second photo below). Blow, a great writer in my opinion, starts out by observing that this pandemic we are all still caught within really has changed most, if not all, of us. First, every day we are surrounded by death statistics – locally, nationally and internationally: a constant barrage of how many are dying by the minute. Second, Blow (who I guess is somewhere in post-middle-age) recognizes all the years he has behind him. He writes, “I realize that, according to the odds, my life is nearly two-thirds over, that I have more summers behind me than in front of me.” That recognition also has a way of changing one's perspective about the meaning of one's life and future. And as I’ve said here before, if you are lucky, you do develop a bit of wisdom along the way.

I agree that this is the time of life when you change. Positive and negative experiences happen in your life that prompt you to evaluate what is worthwhile and what is not. Blow points out that this is the time of life when first marriages die for one reason or another, and then another love is embraced. That “rebirth is possible, that starting over is feasible, that not giving up on love is essential.” But again, the constant occurrences of death all around – both by COVID-19 infections and with friends’ parents and friends themselves dying – “reminds me that life is terribly fragile and short, that we are all just passing through this plane, ever so briefly.” And this changes you.

The other aspect of our lives that seems to have shifted in the past year is the density of our social networks. In an April 25, 2021 op-ed in The New York Times, writer Kate Murphy points out that “the past year has forced a mass meditation on the nature and strength of our social ties. While our culture has encouraged us to accumulate friends, both on- and offline, like points, the pandemic has laid bare the distinction between quantity and quality of connections.”

My dad used to say that if you get to the end of your life and can count four or five close friends on one hand, you are very lucky indeed. His intuition has been supported by research showing that in fact we human beings have the cognitive capacity to “accommodate only four or five close friends.“ So most of us carry around tiers of friends – the immediate, close core of confidants, and then second and even third tiers of colleagues and acquaintances that grow thin as you move out toward the periphery.

In her writing, Murphy actually applauds this winnowing of our social networks necessitated by the pandemic: “When every interpersonal interaction becomes a risk-benefit analysis, you discover pretty quickly how committed you and the other person are to the relationship.” So perhaps one of the benefits here – one of the positives of our current situation – is that we can now focus on our few close friends, relaxing into our precious time together without running ourselves ragged on the social treadmill.

Getting back to Blow’s article, I started off this blog saying that his piece reminds me of the Frank Westie sociology study. Blow quotes the performer Dorian Corey in the documentary “Paris is Burning.” Corey’s character says:

I always had hopes of being a big star. But as you get older, you aim a little lower. Everybody wants to make an impression, some mark upon the world. Then you think, you’ve made a mark on the world if you just get through it, and a few people remember your name. Then you’ve left a mark. You don’t have to bend the whole world. I think it’s better to just enjoy it.

So with that, Blow writes that he has decided that he too will enjoy his life: “I have also decided to be more intentional about managing my personal relationships” – nourishing that tier of those he loves and values, and feels comfortable with – “to live boldly, bravely and openly, to embrace every part of me and to celebrate it.” Let me end with his final words of wisdom:

This doesn’t mean that I’ve grown fatalistic ... it is just a realization that the math says what the math says. And as such, I have begun to make certain adjustments, to change my perspective on my life.

I have started to manage my regrets and to reduce them, to forgive myself for foolish mistakes and reckless choices, to remember that we are all just human beings stumbling through this life, trying to figure it out, falling down and getting back up along the way. ... I have learned to cut myself some slack and get on with being a better person.

And with that, Blow ends his piece by saying that when he is gone, and folks remember his name, he wants some of them to just smile. And maybe that is a hope and an aspiration worth embracing by all of us. 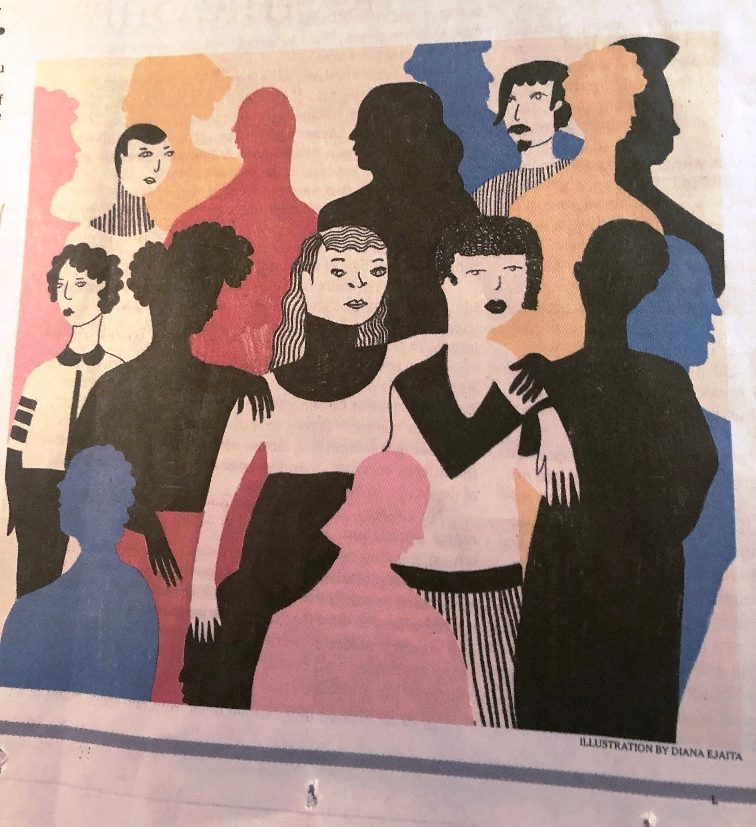 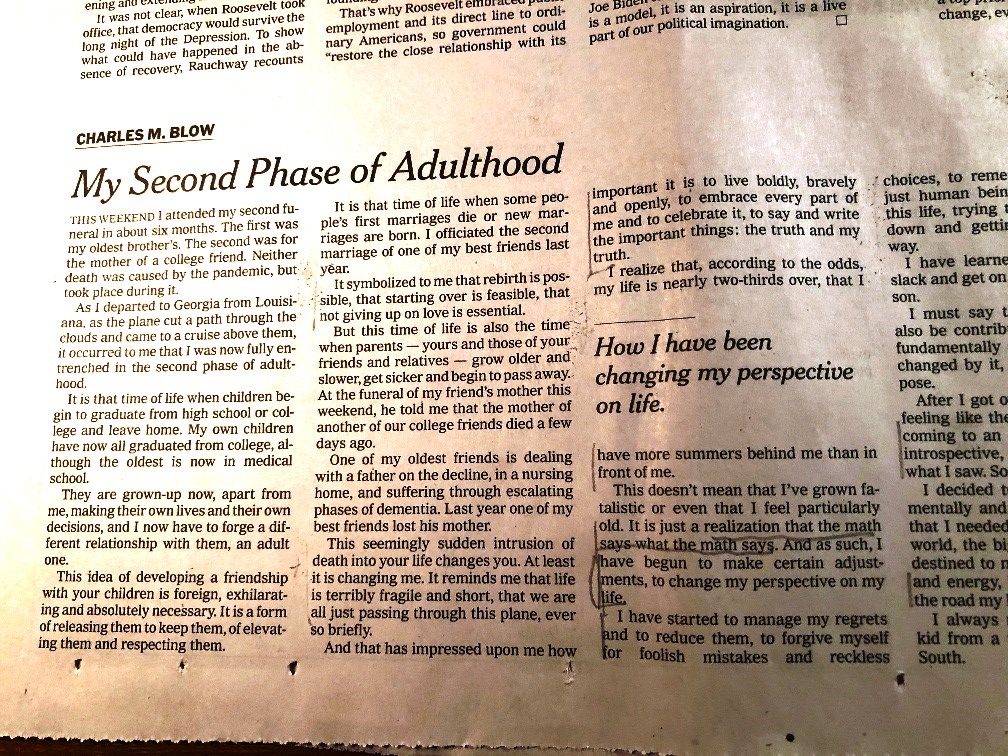