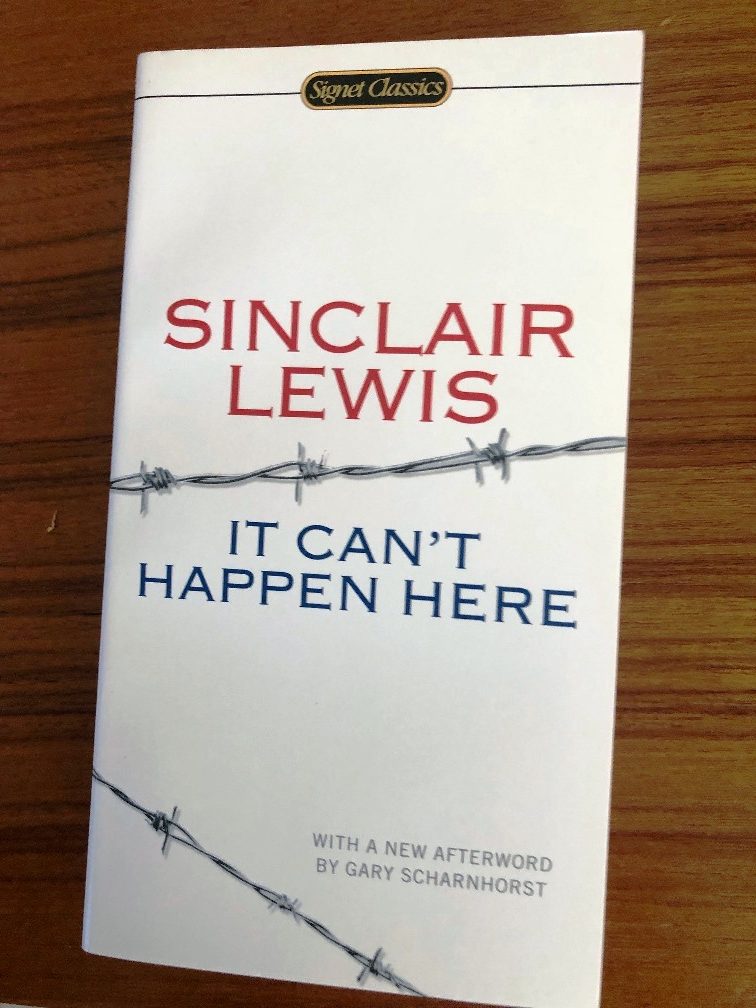 Years ago – I think it was in the 1930s, during the rise of Nazism and fascism generally – Sinclair Lewis wrote a book titled It Can’t Happen Here (see lead photo). And although it was before my time, I believe he concluded that, yes indeed, it could happen here too – in this country – if we weren’t vigilant.

Which brings me to our current political situation. Now, if you are a follower of my blogs, you know that I rarely touch on the topic of politics. And that is true when I preach from the pulpit. The obvious reason is that some of you readers are not on the same page as me when it comes to the political scene. And once you start down that road, you will turn off folks who might have heard you otherwise.

But it is truly hard to ignore our current political landscape. Just sample any newspaper arriving on your doorstep or screen. I happen to read The New York Times, which is a dead giveaway in terms of my political leanings! As an example, on Jan. 22's Opinion page, Jonathan Rauch and Peter Wehner wrote a piece titled, “Illiberalism is a Danger to Us All.” (See second photo below.) (And please note that the Times gives their articles alternate titles for their web edition. The original, print-edition title appears as a footnote at the end of each article.) Their point is that there are radical positions held by both left and right. The left “illiberals” tend to be scaremongers, stirring up fears that our democracy is in danger of crumbling. And on the right, of course, conservative radicals are actively attempting to undermine our free elections by restricting voting rights and stacking the Supreme Court with extremely conservative devotees. They say that “even granting [that the left has contributed to raising our fears for democracy here], the threat from the illiberal right is more immediate and more dangerous. If that wasn’t clear before the last presidential election and the violent attack on the U.S. Capitol ... it should be clear now.”

An example of the left’s “illiberal” thinking appeared in a recent Times op-ed by Jonathan Stevenson and Steven Simon, “We Need to Think the Unthinkable About the U.S.” They state their argument clearly:

Many Americans seem to be whistling past the graveyard of American democracy. In particular, there seems to have been little effort so far at think tanks, professional military institutions and universities to build and contemplate the dire scenarios that have become increasingly plausible. And the worst-case scenario is this: The United States as we know it could come apart at the seams ... could disintegrate. (The New York Times, Jan. 14, 2022, p. A19.)

Even more recently, the headline of a news analysis on the newspaper's front page blared forth in giant type: “Trump’s Aim: Keep Power At All Costs.” Could you see that as a fascist grab for power in our own time – right before our very eyes? Scared yet? Well there’s more to come. And I have a political expert in my own family on whom I can call for his views.

My youngest son, Kevin Esterling, is a professor of Public Policy and Political Science at the University of California at Riverside. So of course he is my go-to authority for all matters political. In January he texted the following to me:

We teach our students that the U.S. is a Republican form of democracy which means that our government is not majoritarian. But that’s for good reason because majorities also can do bad things. The issue instead is that the Constitution was designed to have an intricate set of checks and balances. But even the framers would tell you that the system collapses when there are only two political parties and one becomes authoritarian-nationalist. Unfortunately, there really is nothing in the Constitution that can stop an authoritarian takeover of the national government when it’s done by a major party. And we should understand if Trump or a Trumpist is elected president in 2024 our democracy most likely will end at least at the national level and it would be at least a generation before we could restore it. So that’s the real issue.

The blue states like California will remain democracies though. And of course if Republicans win in 2022 then it might be [that] Trump doesn’t even need to win in order to become president. None of this would be true if the Republican Party had not become an authoritarian party – which unfortunately it undeniably has become.

Scared yet? Well, I just visited Amazon and ordered It Can’t Happen Here. Because to my horror, I guess it could. Food for thought? Read and weep? I wish I had the answer. 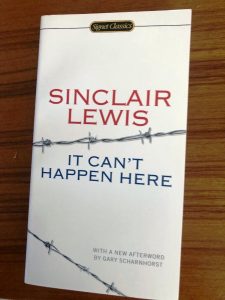 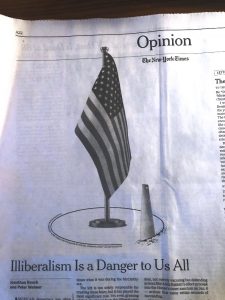