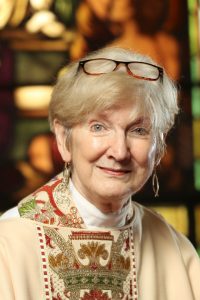 February 26, 2017: I hosted a forum and signed copies of my books at Historic St. John's Church in Richmond.

October 8, 2015: I spoke about "Telling Your Story: The Fiction of our Lives" for the Chrysalis Institute in Richmond, VA.

May 13, 2014: I spoke about Flourishing Life at the annual luncheon of the Presbyterian Women of First Presbyterian Church in Richmond, VA.

March 7-8, 2014: I led a retreat at the DeKoven Retreat Center in Racine, Wisconsin, entitled, "A Retreat: Flourishing and Enriching the Story of your Life Throughout your Whole Journey."

January 2013: I was interviewed and featured in an article in Richmond Magazine. Primarily a biographical profile, I had the chance to talk about my newest book, Flourishing Life, and the differences between "reinventing oneself" and "rewriting your life's story." You can read the article and see the accompanying photography (including the photo at left) on the magazine's website.

September 16, 23 & 30, 2012: Three-part sermon series: "The Embodied Self and the Flourishing Life: An Introduction," "Flourishing in the Face of Loss," and "The Ultimate Flourishing: Resurrection Life and Kingdom Living," Historic St. John's Church, Richmond, VA