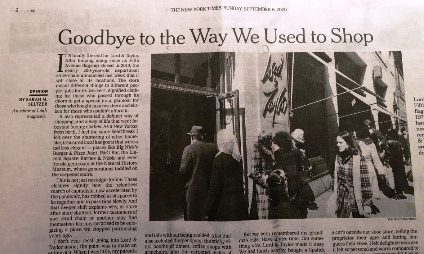 Post-First Debate Blues:
Goodbye to Our Way of Life

It's difficult to ignore the big things going on around us. Early voting, looming election, pandemic and President with COVID-19; stores and restaurants boarded up, masks now a way of life – an essential to my wardrobe. Not much else going on really. We voted this past week – with mail-in ballots that we chose to hand-carry to our county Registrar’s office instead of popping into the nearby post office. Kids visiting this weekend, seeing friends occasionally. Not much else going on. Except the big things swirling around us on the streets and in the news.

Last month there was a nostalgic opinion piece in The New York Times by Sarah Seltzer (“Goodbye to the Way We Used to Shop,” Sept. 6, 2020. See lead photo.) reflecting on the demise of the venerable Lord & Taylor stores – New York Fifth Avenue flagship and all. We have probably all experienced the passing of retail stores that hold our memories, dying finally of pandemic fears, but slowly dying in any case due to online shopping for everything from clothes to books to tools and even cars by internet order. In the past, stores like Barnes & Noble ran small, independent bookstores out of business. Now Amazon has eroded that giant book chain’s monopoly on book browsing and buying. As Seltzer points out, it’s not just the stores we frequented when we needed the right gift or the right outfit for Saturday night: It was the hours we spent just looking; sipping something refreshing in the store’s café; resting on comfortable, overstuffed couches to watch the humanity parade by. All of that is changed or gone – with our memories and way of life with it.

Though when you think about it, life is change, isn’t it? Nothing really stays the same. Are you the same person you were 20 years ago? Even 10 years ago? I’m not. Nor would I want to be! Change is a part of human life. My South African theologian friend John de Gruchy wrote a recent meditation titled “Living with Change.” In that piece he reflects on the Bible as a “book of changes.” He writes “the Bible is a book of changes and transitions largely because it weaves an historical narrative from one generation to the next – from a perpetual holiday in paradise to working the soil on earth; from slavery in Egypt to the Promised Land; from Jerusalem to exile in Babylon and back ... about a shift from the Old Covenant to the New; ... from the church as a Jewish sect to the church for all people” – with the hope that the end of the story is the “birth of a ‘new heaven and a new earth.’” He ends his description of the Bible as a book of transitions by affirming that our entire faith story is one of movement and change, because “God in whom we believe is always making things new.”

But John also notes that, unfortunately, not all change is for the better. Change is not always good, certainly the kinds of changes we are experiencing now – at least in the short run (taking the long view): Folks out of work, people dropping like flies all around us, not to mention the sorry spectacle of our recent first presidential debate. I don’t care which side of the aisle you happen to be on, I would think most of you were somewhere near horrified at Chris Wallace’s failure to even control the antics on stage during the debate, though heaven knows he tried. Two days after that debate, Ulrich Speck, an analyst with the German Marshall Fund in Berlin, was quoted as saying “there is a consensus in Europe that this is getting out of hand, and this debate is an indicator of the bad shape of the American democracy.” (The New York Times, Thursday, Oct. 1, 2020.) Another international commentator said the debate “encapsulates all that has gone wrong in American politics.”

But I’m afraid it’s not just American politics. It’s something about our whole way of life, our quality of life in America, that is declining. In fact, the release of the 2020 Social Progress Index in early September shows that out of 163 countries assessed across the world, the United States, Brazil and Hungary are the only ones in which folks are worse off than when the Index began in 2011. And the declines in Brazil and Hungary are smaller than ours. The Index collects 50 measures of well-being across countries, including nutrition, safety, freedom, environment, health, education and more. The U.S., “despite its immense wealth, military power and cultural influence, ranks 28th – having slipped from 19th in 2011. The statistics are startling. While we rank No. 1 in the quality of our universities, we are ranked only No. 91 in access to quality basic education. We lead the world in medical technology, but we are No. 97 in access to quality health care.”Harvard Professor Michael Porter summarizes: “We are no longer the country we like to think we are.” (“We’re No. 28! And Dropping!” writes Nicholas Kristof in The New York Times, Sept. 10, 2020. See second photo below.)

Viewing the recent debate through the lens of the Index’s report, David Brooks offers a rather scathing view of our current President in an op-ed piece titled “When a Heart is Empty.” Writing prior to that spectacle of a debate, he echoes others’ written works like thsoe of Mary Trump, John Bolton and others. I don’t intend this blog to be pointedly political – more of a cultural critique of the state of the current change and transition we are witnessing and swept up into in our everyday lives – but it is the very ending of Brooks’ article that speaks, at least in part, to our current situation. He writes:

The heart is the key to understanding. To accurately size up a human situation you have to project a certain quality of attention that is personal, gentle, respectful. ... But I see less and less of this sort of attention in America, even amid the tragedies of 2020. Far from softening toward one another, the whole country feels even more rived, more hardened and increasingly blind to lives other than our own.

So where do we go from here? Do we try to understand one another? Speak out civilly? Fight against bigotry and racism? Go out and vote our conscience? Work within the system to change it?

Speak out gently, but speak out.

Interestingly, all week I have sat with this blog, and I still am struggling hard with how to end it. I offer with others a long view of where we are headed as a country. And right now, the picture isn’t all that good – in terms of our quality of life, our leadership, and the soil of our culture that has produced the likes of Proud Boys. They may not “stand back and stand by.” So speak out now – gently – and support a noble cause or two, like working to make sure that all Americans can vote, that all have access to some quality health care, that our environment is protected. Speak out – gently – before it’s too late.

Seltzer's "Goodbye to the Way We Used to Shop" 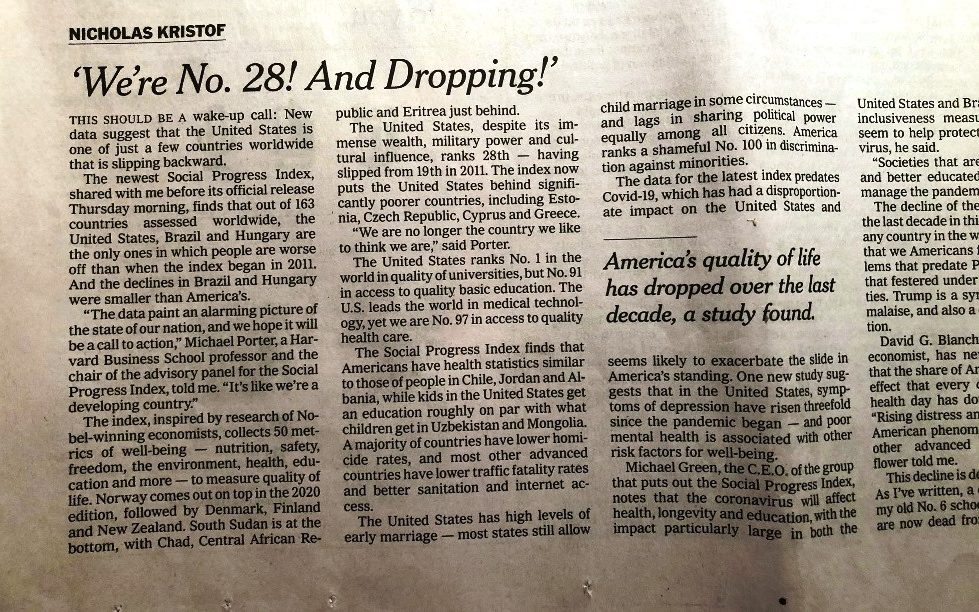