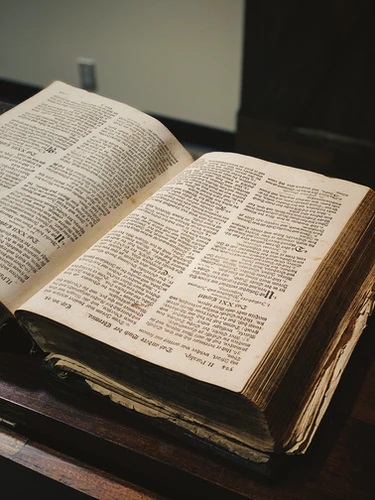 The Bible: The Book that Reads Us*

The title of this little piece is a quote from someone ... I don’t remember whom; some scripture scholar or other I ran across while in seminary. And since I write this while it is still Lent, I thought it might be worthwhile to think a little deeper about this book that plays a central role in all of our lives – one way or another. We hear or read the lectionary every Sunday morning and visit the Old Testament (known as the Hebrew Bible) as well as the New Testament. And, of course, our own Book of Common Prayer – 90 percent of it made up of “biblical phraseology, mashed up and remixed so that we may,” as one BCP collect puts it, “inwardly digest it as we pray.”

That last quote is from a recent article appearing in the Christian Century by Ellen Davis, a biblical scholar who has taught at Duke University for the past two decades. She had also taught at Virginia Theological Seminary, my alma mater, and our paths crossed there after I left that campus. She was invited back to discuss a book of hers that had just been published. Reading that Christian Century article, titled “Weaving my Vocation,” I was struck by a couple of her observations that I’d like to share here.

Davis describes the Bible as “a source not of doctrinal propositions but rather of language for reckoning with reality.” She adds that “it is the most fully adequate source known to me of a complex story that rings true, of essential concepts and poetic images that equip me to live in awareness of God, self, and neighbor and make sense of what I experience.” She also writes that she learned “something about the kind of questions that are worth engaging century after century” by our ancestors in the faith – both Jews and Christians over millennia. Davis adds that without the words and stories of scripture, “we would have no way of talking about God in relation to ourselves.”

I think that’s a pretty strong statement – but unless you are given to direct, mystical rapture, which presumably is beyond words and descriptions in any case, the Bible is indeed our chief way of encountering God. And thinking about that, I turned to my bookshelf and pulled off one of my own books written a few years back – because I knew that I had devoted much of a chapter in that book (Imagination and the Journey of Faith) to the Bible. In a section labeled “Meeting God in the Story of Scripture,” I read again what I had published in 2008, and I found a discussion of scripture that I believe is amazingly complementary to Davis’ article.

In that section I repeat a theme that occurs over and over in that work of mine: All good stories, including the ones we read in the Bible, feed our imaginations and can affect us deeply; they are potential conduits of grace-filled images that color the world before us and shape our lives. But then, I hasten to make clear that at least for religious believers, the Bible is not like just any other novel that also can affect us deeply. And I then go on to list at least three ways the Bible stories are distinct from other narrative genres.

First, again for religious believers, “these biblical writers [who set down all these scripture stories] are seen as inspired by God to set down God’s particular dealings with humankind in history – responding with limited perspectives to the mighty acts of God – imaginatively describing as best they could the ‘unfathomability of life in history under an inscrutable God.’” Second, the Bible is not just another story “because it contains stories of our ancestors in the faith” – something like a family album. And finally, the Bible is distinct from other narratives because “the Bible is the church’s book.” True, I point out that every generation, every denomination and every church gathering reads the scripture stories through the lens of their own culture and times. And because the Bible is the Church’s book, this reading needs to take place within the “stretchable bounds of Judeo-Christian tradition” – meaning that not just anything and everything goes when it comes to confronting the biblical text and imaginatively making something of it.

Let me close this piece with a longer quote from my book, because it not only brings us back full circle to the title of this article, but makes a final, essential point in closing.

And so, in the last analysis, the Bible is a book about us. We imagine ourselves in the fictionalized characters that we meet there – the farmers and the fishermen, the thieves and the traitors, the Good Samaritan and the Prodigal Son, the servants and the scribes. In short, we see women and men of all sorts and conditions who manage, like us, to be both good and bad, sometimes wondrously or disastrously so. Finally ... the Bible’s stories have the quality of “frictionality” – “irritating qualities which drive us to scratch and read again, aware that there are traces left which never yield” to any final or fixed form.

But the Central Character, as well as Author, who hovers over and behind the text is of course God. As someone has said, “the Bible without God is as unimaginable as Moby Dick without the whale.” This is finally God’s book, the One who is not seen directly but who is glimpsed in the lives of the characters who encountered him, and in the imaginations of those inspired to set down these stories that shaped their lives and that ultimately shape our own. (Imagination and the Journey of Faith, p. 98)

And so, despite the fact that Lent has now ended as you're reading this, we are in the great Fifty Days of the Easter season. So pick up again your copy of the Book that reads you, and read, mark, and inwardly digest those stories that enable you to encounter God daily in the quiet of your life.

*Reprinted from The Cloak, a monthly newsletter of St. Martin's Church, Richmond, VA