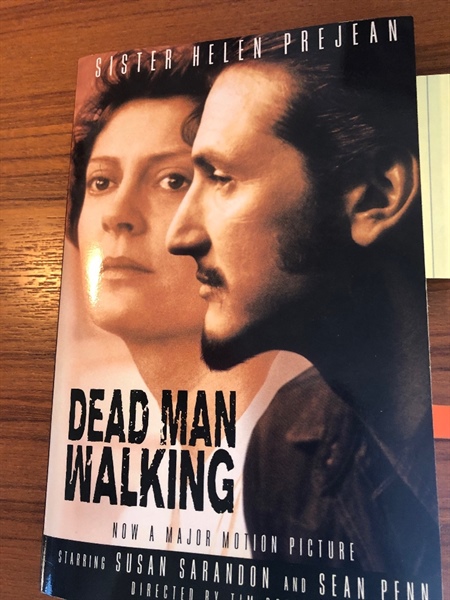 The Face of Love:
Compassion and Mercy in the Face of Evil

Do you remember the film "Dead Man Walking," starring Susan Sarandon and Sean Penn? I saw it some years ago when it first came out. Since David had never seen it, we watched it on TV a week or so back. Sean Penn was SO convincing in the role of a death row inmate who's been sentenced to die for rape and murder. Susan Sarandon played Sr. Helen Prejean, a Sister of St. Joseph who ministers to the character played by Penn – Robert Willie in real life – as he goes to his death, executed by the state of Louisiana. Turns out Willie was electrocuted. But Penn’s character, Matthew Poncelet, was killed by lethal injection. A more humane method is the argument!

If you remember, Sr. Prejean was wary of this murderer – although he insisted on his innocence, as apparently most death row inmates do. In a series of flashbacks over the course of the movie, it is clear that he and a buddy committed the heinous crimes, taking turns raping a teenage girl and then killing both her and her boyfriend – his buddy repeatedly stabbing the girl to death and Sean’s character finally blasting a shotgun into the back of the boy’s head.

But by the end of the film, Penn’s character becomes almost sympathetic. Led by the Sister, he takes “responsibility” for what he has done and finally, in the death chamber, apologizes for his evil acts as he is preparing to die by injection ... looking into the “face of love” that the Sister offers him as he lies strapped down and dying.

I saw "Dead Man Walking" (which, by the way, is a phrase apparently customarily said when a convict is moved from his final holding cell to the death chamber) shortly after I had read Sr. Prejean’s memoir by that title (see lead photo). I read that book while on retreat at a Trappist monastery in northwest Virginia, and that book radically changed my life. I became an activist against the death penalty – marching at our state capitol, standing vigil outside Virginia’s own death house as someone was executed by the state in my name – after all, you and I are citizens of the state, and the state acts on our behalf. The paragraph in Prejean’s book that changed my attitude regarding the death penalty is:

An execution is ugly because the premeditated killing of a human being is ugly. Torture is ugly. Gassing, hanging, shooting, electrocuting, or lethally injecting a person whose hands and feet are tied is ugly. And hiding the ugliness from view and rationalizing it numbs our minds to the horror of what we are doing. This is what truly “coarsens” us [in the end]. (p. 216)

I found that statement utterly convincing, and to this day I am opposed to the death penalty. In fact, for years I carried a card in my billfold that stated that if I should ever be murdered, I did not want my murderer to be executed as revenge.

Some of you might be arguing with me and that’s OK. We don’t have to agree on everything. But as a Christian, I have to ask the question: What about redemption? As I said above, at the end of the film, Matthew Poncelet (Sean Penn) became a sympathetic character, seeming to have a conversion of heart, owning up to his past deeds, apologizing to all he had hurt in the process. But I know, I know. There are some very bad dudes out there, there is evil committed every day. Read the paper, right? The father of one of the youths killed by Robert Willie said, “Robert Willie is God’s mistake. Frying in the electric chair is the least of the frying he’s about to do when God sends him to hell where he belongs.” Think of Charlottesville, think of the Holocaust. Evil is out there, floating in the ether. Conspiracy theories like QAnon feed hatred, with users embracing theories like religious systems, fueling hate crimes in the process. (See The New York Times' front-page story, “Web Delusion Oozes Offline to Real World,” Feb. 10, 2020.)

So no, I won’t deny for a moment the presence of evil in history and in our own time. But still: What about redemption? What about conversion? Is there any good in the worst of us? Anything worth saving? After all, judgment and aggression and enmity are part of our evolutionary makeup. Ever since we crawled out of caves and formed tribes, for our own survival there was Us against Them. And it's still in us, just beneath the surface, overlaid by culture and tradition, fine-tuned by personality and individual brain-wiring.

David Bentley Hart has recently published a book titled, That All May Be Saved. I’ve started it and it’s a strong argument for universal salvation – for all humans in the end. Not to go into his complex argument here, but shortly after I began to take a look at the book, he also published an op-ed piece in The New York Times titled, “Why Do People Believe In Hell?” (See second photo below.) Hart starts off saying that of the many books he has written, never has he published one that has caused such vitriolic response as this one. Many Christians in fact seem to have a deep, emotional need to believe in hell as an eternal punishment for wrongdoing in this life. He writes:


How can we be winners, after all, if there are no losers? Where’s the joy in getting into the gated community and the private academy if it turns out that the gates are merely decorative and the academy has an inexhaustible scholarship program for the underprivileged? What success can there be that isn’t validated by another’s failure? What heaven can there be for us without an eternity in which to relish the impotent envy of those outside its walls?

After the march on Charlottesville and the hatred spewed out of the neo-Nazi brotherhood, Jim Friedrich wrote an article, “The Demons Have Come Out” (third photo below). He wondered how these mostly young men could be consumed with so much hate. Acknowledging that hatred and destructiveness are part of all of us to some extent, they seem to come especially to the fore when some are treated as less human than others. Friedrich doesn’t have any definitive answers, but he finishes the piece by holding up images, icons of love that at their purist, can give witness to human beings at their best – setting us “free from the toxic narrative of hate, fear, domination, and greed and give us a better story [where] everything is gift and everyone is neighbor.” To be the icon in the room, to shine forth the face of love as a “site of manifestation and illumination.”

Sr. Prejean told Matthew Poncelet (as well as Robert Willie in real life) – as he was being strapped down – to look at her face as he died and to see the face of love. And as he was executed she mouthed the words “I love you” through the glass partition and he responded “I love you” to her as he died. 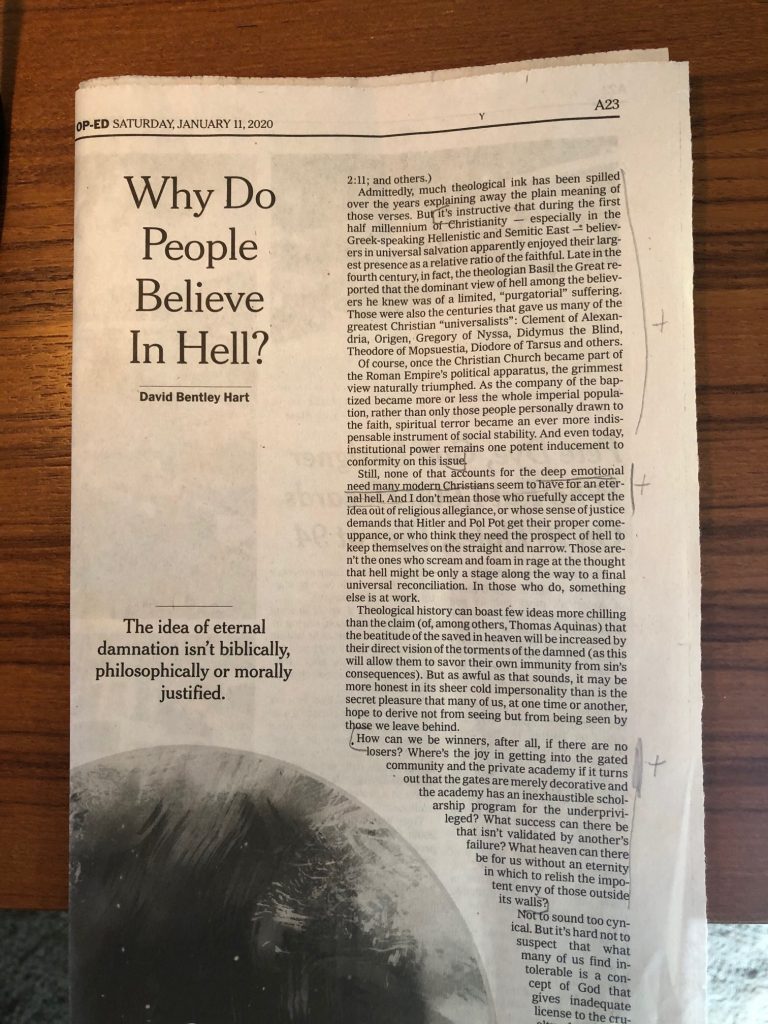 Hart’s "Why Do People Believe in Hell?" 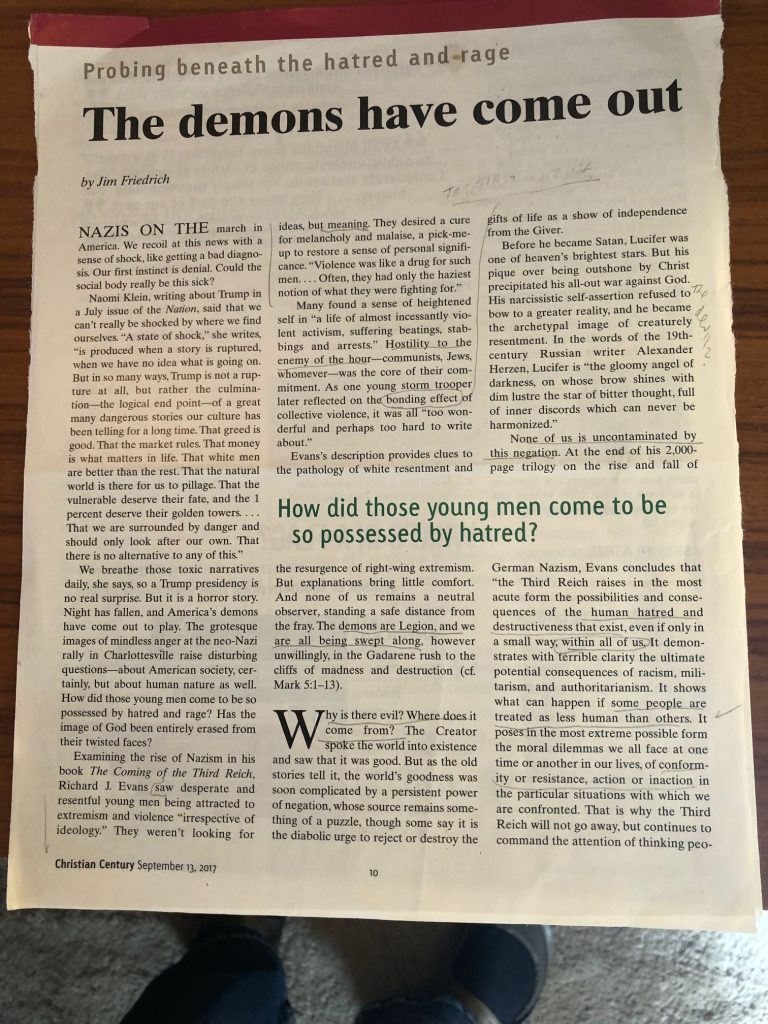 Friedrich’s "The Demons Have Come Out"