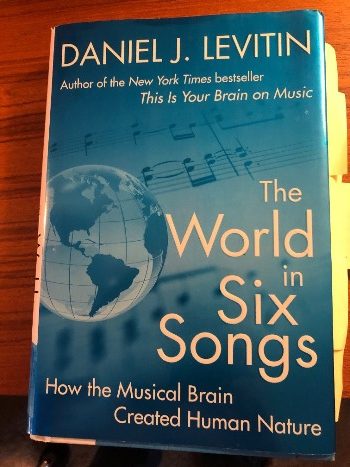 The Magic of Music: A Powerful Brain Stimulant

Dan Levitin, a neuroscientist and musician, was my go-to guy for all things musical when I was writing my latest book, The Fiction of Our Lives: Creating Our Stories Over a Lifetime. In his book The World in Six Songs (see lead photo), he writes the following paragraph that I included in the introduction to my book. His words are a great summation of the point I want to make here:

We are all descended from ancestors who loved music and dance, storytelling, and spirituality. We are descended from ancestors who sealed mating rituals and wedding ceremonies with song, as we do now (or at least boomers like me) with “The Wedding Song” (There is Love), The Carpenters’ “Close to You,” Nat King Cole’s “Unforgettable,” and Billy Joel’s “Just the Way You Are.” Songs like these remind us during life cycle events that we are part of a chain of continuing ceremony and ritual, participating as our [pre-human] ancestors did, binding our collective past to our personal future. (p. 225)

You probably have your own favorites that bind your generation’s songs to your current and perhaps future life, playing over and over in your head or on your favorite Pandora station. In his book, Levitin points out that our memory of music is actually one of the last things to go. He writes, “old people who are otherwise unable to remember the names of their spouse or children, or even what year it is, can be brought arrestingly back to focus by hearing the music of their youth – songs that they sing along with, tap their feet to, and can remember all the notes and lyrics of” (p. 92). When my mom was nearing 100 years old and in a nursing home – also with dementia – she would perk right up when we put on a CD of Glen Miller’s music, tapping her fingers to the rhythm of the big band era. In fact, research has shown that it is the music of our youth and young adulthood that stays our whole life long, embedded in the memory centers of our brain.

David and I do listen to music morning, noon, and night – from Baroque classics at breakfast to music of the ’60s, ’70s and ’80s, both in the car and on the iPhone. And our mood pretty much determines the choice of stations. For example, if we want a pick-up, we listen to Hall & Oates or Fleetwood Mac; if we want soothing, we turn to Neil Diamond or Gordon Lightfoot. And once in a while we will discover something new that really grabs our attention and powerfully moves us with meaningful lyrics.

Recently we found a song that has great appeal to us. It's a Gospel song recorded by Johnny Cash. Its genre is Country, which I’m not much into. But because of our commitment to the church and religious sentiment, I’d like to share a bit of it with you before turning to some recent research on music’s power over our brains. The song is titled “A Half a Mile a Day.” Maybe you know it, but it was a new find for me.

The lyrics tell a story of the singer wandering into a little church with evangelical leanings. Such churches frequently encourage those attending to stand up and give witness to their faith and often share conversion stories. So the singer tells of three men who gave such witness, all three asserting in one way or another that when they died, they were going “straight to heaven” as fast as they could go. One stood up and said, “I’m sailin’ right straight into heaven like a giant clipper ship” with nothing impeding his journey. But finally, a little lady who was sitting next to the singer stood, turned her face straight up to heaven and sang (in Cash’s voice, of course):

I'm comin', Lord for my heavenly reward
I'm on my way to You, can You see me comin' through?
Through clouds of persecution and stumblin' on the way
But I expect I'm making 'bout a half a mile a day

Lord, when I let You lead, I don't make any speed
'Cause I have to stop and touch the ones who need so much
And then sometimes others pull me off of Your narrow way
And by my mistakes I barely make a half a mile a day

Cash ends with, And the whole congregation said, “Amen, sister.”

Over the years there has been a spate of studies on the effect of music not only on our brains, but on our overall health and well-being. In a recent article in the American Psychological Association’s publication Monitor on Psychology (November/December 2020), the authors discuss findings that suggest not only that music can enhance brain development; it also may help people recover from COVID-19 infections. Similarly, in the latest issue of the Harvard Heart Letter (February 2021; see second photo below), the writer emphasizes the benefits of listening to music while exercising – increasing stamina as you run on that treadmill. (It works for me!) But music has also been used to reduce pain and anxiety for folks undergoing stressful medical procedures like cardiac catheterizations.

So music ... if not magic ... is a wondrous, healing balm. As I have noted in my books and otherwise, recent brain studies have shown an increase in “feel-good” neurochemicals like dopamine and serotonin that soothe the brain and calm the emotions, again suggesting an ancient, evolved advantage to playing music in our earliest ancestors. Some have speculated that such neuromodulators may have defused hostility within tribal groupings, raising levels of trust and social bonding, dampening aggression or even murder within primitive gatherings. Let me close with a summary statement of Levitin’s:

The story of your brain on music is the story of an exquisite orchestration of brain regions, involving both the oldest and newest parts of the human brain. ... It involves a precision choreography of neurochemical release and uptake between logical prediction systems and emotional reward systems. When we love a piece of music, it reminds us of other music we have heard, and it activates memory traces of emotional times in our lives. Your brain on music is all about ... connections (This is Your Brain on Music, p. 192). (See third photo below.) 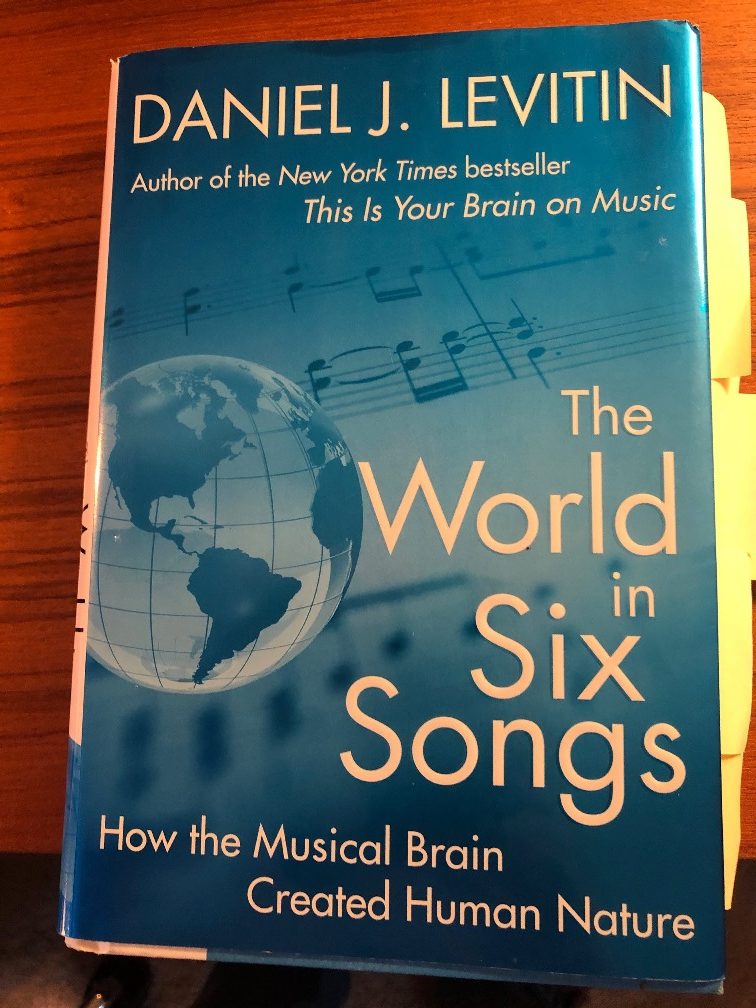 Levitin's The World in Six Songs 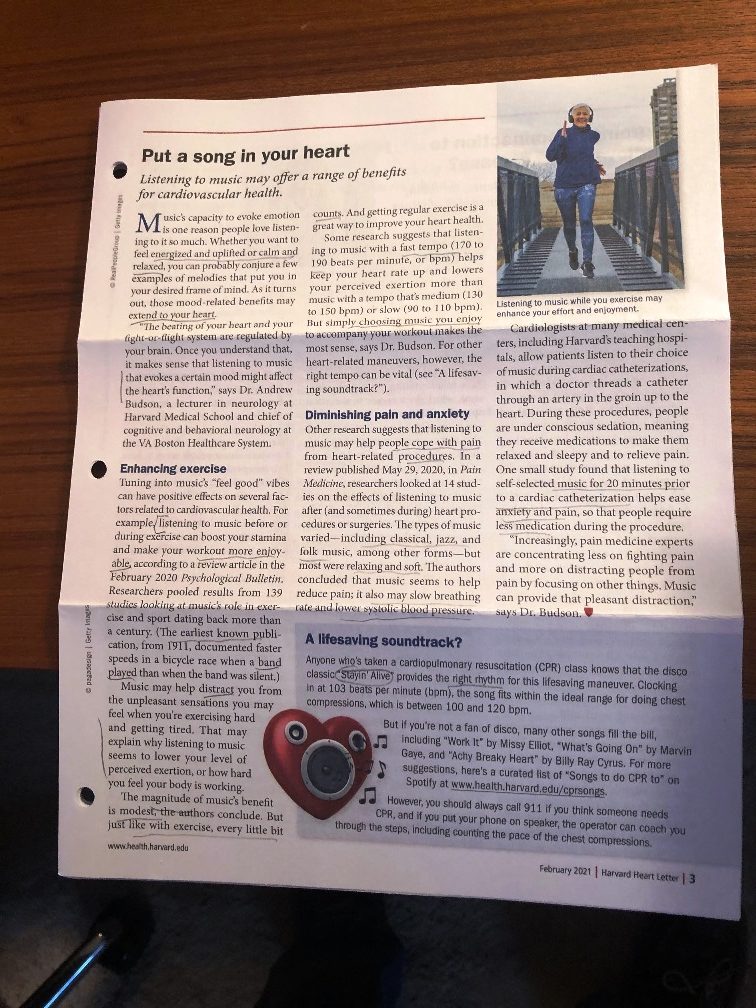 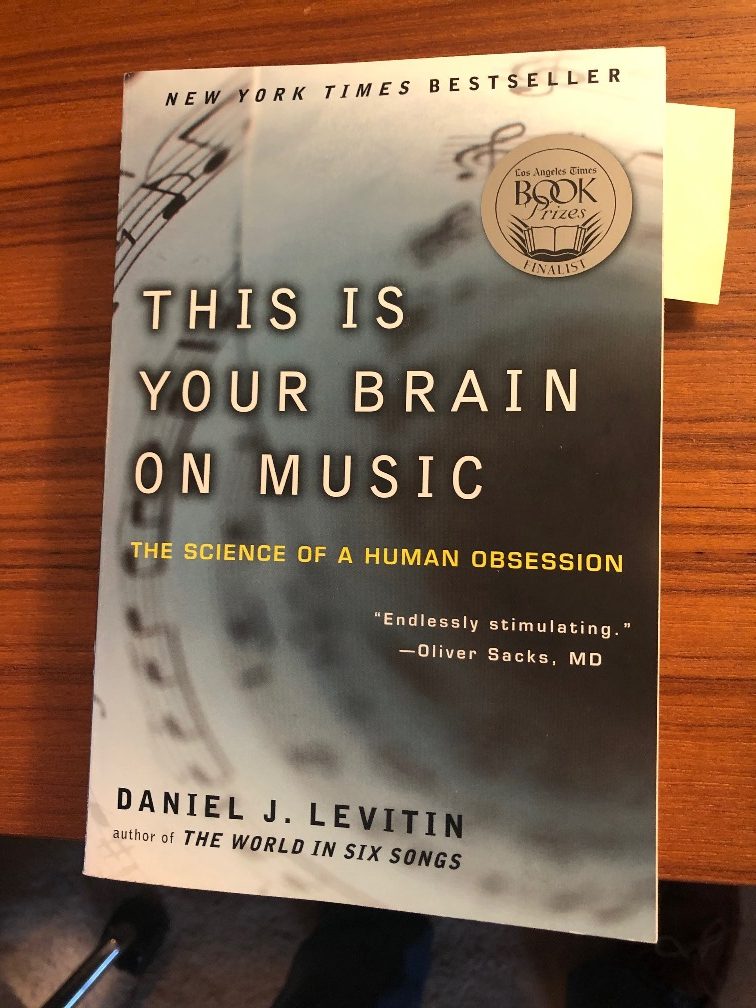 Levitin's This is Your Brain on Music