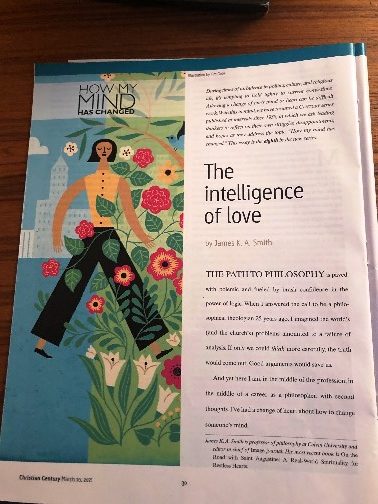 The Making of Meaning in Our Lives:
Listening for the Rumor of Angels

When I was a graduate student in psychology, each year we were required to design an original experiment and test its hypothesis by signing up undergraduates as subjects and “running” them in our laboratories as one would run rats in a cage. But I became a bit of a maverick, deciding early on that asking undergraduates to press buttons or “choose one of the above” actually told me nothing about how people behave in the real world. (Although I did “run” subjects, because I needed to jump through all the hoops to get my Ph.D.) But otherwise, I chose to read a lot of Freud and existential psychologists and philosophers like Viktor Frankl (From Death Camp to Existentialism; Man’s Search for Meaning) and Maurice Merleau-Ponty’s Phenomenology of Perception, and the like. I sort of went my own way, and the Psychology department at Indiana University - Bloomington tolerated my deviant behavior because, after all, this was the '60s and everyone was allowed – within limits – to “do their own thing.”

I recently revisited that early history while reading an article in the Christian Century by James K. A. Smith, “The Intelligence of Love.” (See the lead photo.) Smith, the current editor of the journal Image, started out his academic career as a philosopher and theologian. At that point in his life, he was convinced that he could persuade others to see the Truth of Christianity by rationally laying out the arguments before them. He says he sensed that “God wanted me to study philosophy to bring its analytical gifts to theology and the church.” He then followed that statement with the following observation: “Nothing beats the love of wisdom out of you like a graduate program in philosophy.” And that is when the memory of my own graduate training kicked in. I could have just as easily substituted "psychology"for his "philosophy" and said, “Amen!”

Toward the end of that Christian Century piece, Smith concludes:

Needless to say, I’ve abandoned all hope that we can think our way out of the mess we’ve made of the world. The pathology that besets us in this cultural moment is a failure of imagination [emphasis added], specifically the failure to image the other as neighbor. Empathy is ultimately a feat of the imagination, and arguments are no therapy for a failed, shriveled imagination. It will be the arts that resuscitate the imagination.

... I’m throwing in my lot with the poets and painters, the novelists and songwriters. While Plato would exile them from his ideal city, these artists are the unacknowledged legislators of the city of God.

Well, for those of you who follow these blogs and/or read my books, you must know that I put great stock in our imaginative capacity: our ability to make meaning in our lives all our days by exercising our imaginative faculty. Drawing on our memories, our emotions, our brain’s capacity to synthesize all of those neural networks – fed also by our cultural resources – we create meaning as we shape the story of our lives. Frederick Buechner once wrote that “imagining is perhaps as close as humans get to creating something out of nothing the way God is said to. It is a power that to one degree or another everybody has or can develop, like whistling. Like muscles, it can be strengthened through practice and exercise.” Citing Smith’s quote above, apparently this faculty can also shrivel if not nurtured by various practices – and we’ll get to those in a minute.

As I write in Imagination and the Journey of Faith, we are in fact children of our times, and our imaginations are shaped by the times we live in. We can’t really escape from the technological world we live in – the computers and the cell phones and the Zoom meetings that absorb our time. But I also think that many long for something more, something beyond the mundane. While feeling the pull of post-modern skepticism, our hope beyond the everydayness of our lives hums beneath the surface of work and bills.

In 2002, Charles Taylor published a book titled Varieties of Religion Today. In it, he describes this tug between rational science and postmodern skepticism on the one hand, and this sense of something more on the other – this haunting rumor of angels that you and I may also feel, being children of our culture. In my own work, I write:

[Taylor] says that in order to navigate our world, we have to lean one way or another – we can’t sit on the fence that marks off both realities, the rational and the mystical worlds of our experience. But both remain present. If we opt for belief in angels, we are still nagged by the skeptical rationalism of the day that pervades our common culture. But if we opt for scientific, rational empiricism, we still have this sense that some transcendent meaning eludes our grasp. As Taylor says, “People go on feeling a sense of unease at the world of unbelief: some sense that something big, something important has been left out, some level of profound desire has been ignored, some greater reality outside us has been closed off.”

Well as Taylor writes, we all live more or less on this cultural cusp, pulled by both rational and religious impulse. We make our way, groping toward some larger meaning, maybe embracing some kind of fragile faith in the process.

My take-home point: Our imaginations are primary as we grasp for some larger meaning in our lives, as we listen for the rumor of angels in our midst. In an April 7, 2021 article in the Christian Century, Kirk Jones published an article titled “Holy Creativity: Ten Ways to Embrace Our Divine Creative Power.” (See the second photo below.) His suggestions for strengthening our creative powers include practices such as expecting to be creative, paying patient attention to small, everyday experiences that prove to be arresting, resting your mind and body, and so forth. I would add meditating on spiritual classics like Julian of Norwich’s Revelations of Divine Love or its contemporary treatment in Robert Fruehwirth’s The Drawing of this Love. (See third and fourth photos below.) Or reading poetry – anything by Mary Oliver or Wendell Berry – or novels, especially Tolstoy’s The Death of Ivan Ilych or Anne Tyler’s Patchwork Planet, reflecting on the meaning they call forth in your own life.

We cannot escape our technological culture; even if we could, we'd probably opt to remain where we are. But let’s hang on to what is good that it offers while leaning toward meaning-making that feeds our souls. I hope this for you and for me as we move across our days to their end. 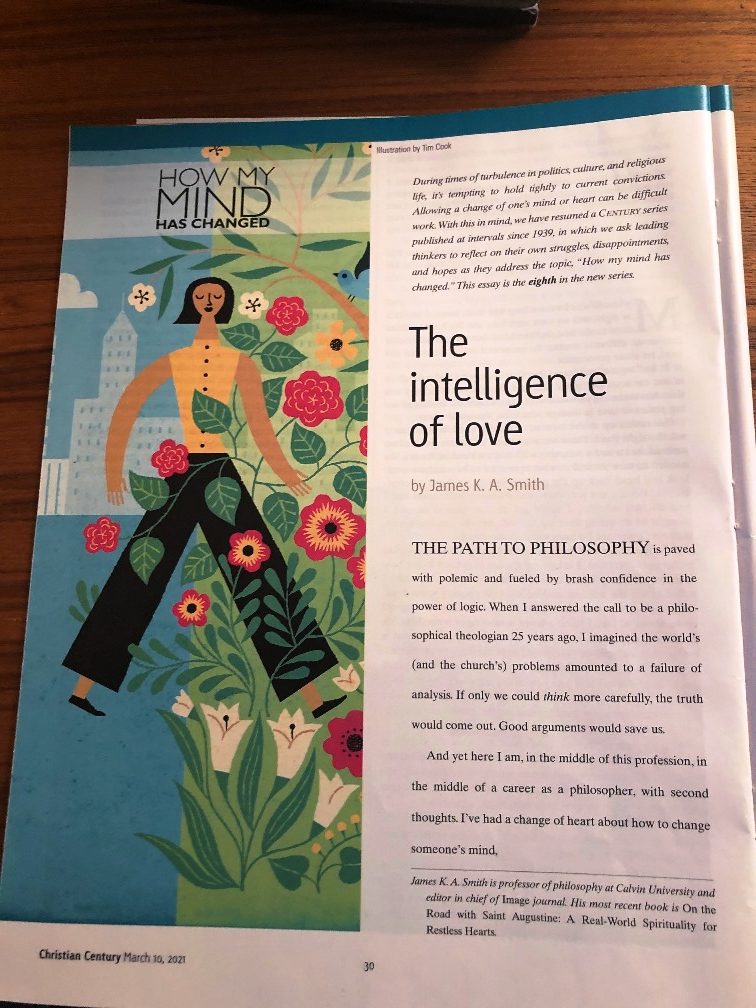 James K. A. Smith's “The Intelligence of Love" 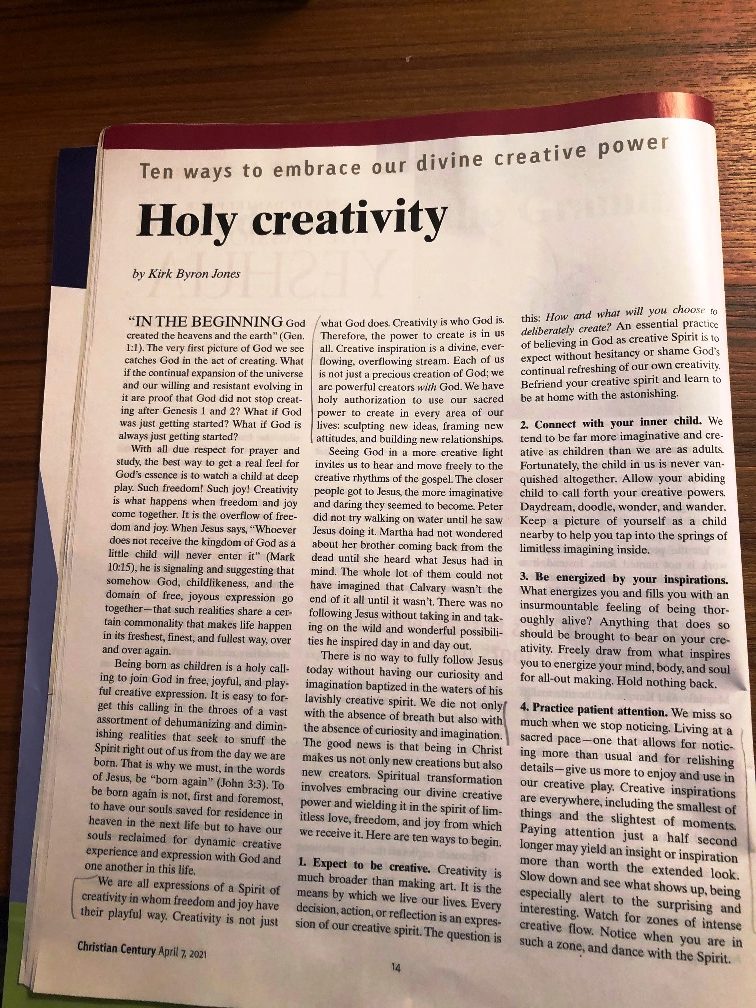 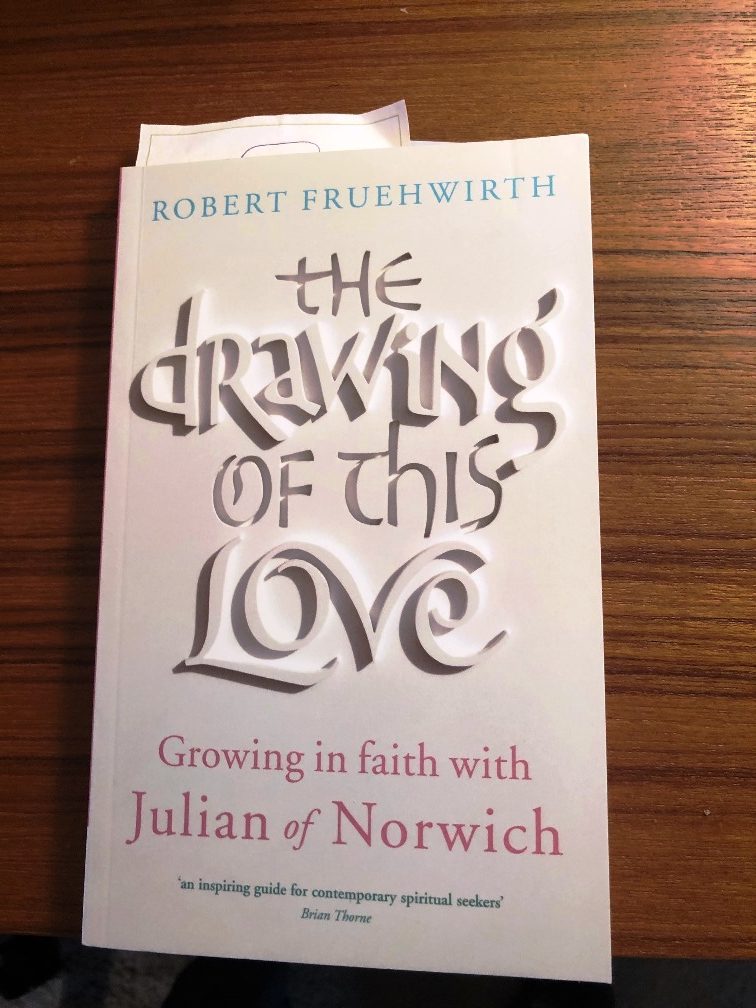 Robert Fruehwirth’s The Drawing of this Love