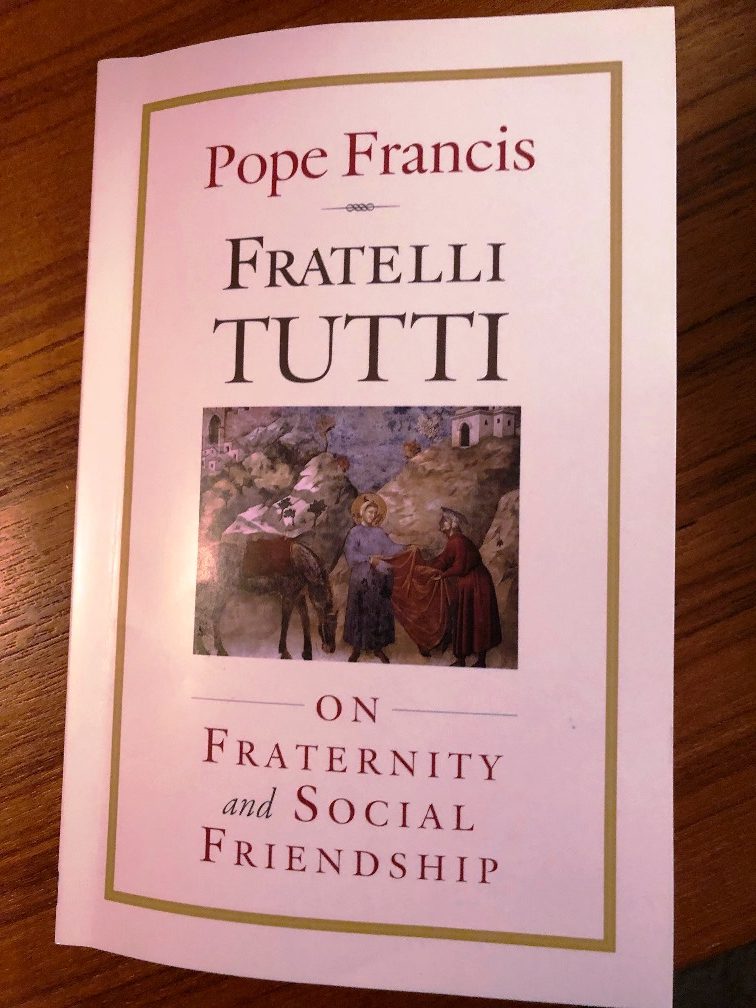 Together We Stand; Divided We ... Are Much Less Than We Could Be as Humans

Some of you may know that for a good chunk of my adolescent and adult years I was a Roman Catholic. I was a convert to that communion during my senior year in high school – much to my parents’ dismay; good Protestants that they were. But I was very attracted to the rich liturgy, ritual and sacraments. And of course, I still am to this day. Hence I’ve made a happy home base here at St. Martin’s.

But “Catholic ways” are still ingrained in me. For example, I have a dear friend who also happens to be my Spiritual Director – Fr. Peter Creed, a Roman Catholic priest who lives in Williamsburg, Virginia. Fr. Pete and I get together in one of our houses every other month to check in with each other and look at what God might be up to in our lives. Fr. Pete also participated in David’s and my wedding and the two of them have drawn pretty close.

Anyway, when Pete and I get together we also share what each of us considers important spiritual reading that we’re currently doing. Recently, Pete gave me a little paperback authored by Pope Francis titled Fratelli Tutti: On Fraternity and Social Friendship (Twenty-Third Publications, 2020). (See lead photo.) This is a collection of other writings by Pope Francis, tied together with enough commentary to make a seamless whole. When Pete gave it to me, he said it was one of the best things he’d read on the “brotherhood of man” or our common humanity as we are called to live in charity with all – irrespective of belief or nationality, race, or any of the other features that divide us, making for wars and other failings of love and charity.

Let me share a short quote from its introduction with you to give you a feel for Francis’ tone:

I offer this social Encyclical as a modest contribution to continued reflection in the hope that in the face of present-day attempts to eliminate or ignore others, we may prove capable of responding with a new vision of fraternity and social friendship that will not remain at the level of words. ... As I was writing this, the COVID-19 pandemic unexpectedly erupted, exposing our false securities. ... For all our hyper-connectivity, we witnessed a fragmentation that made it more difficult to resolve problems that affect us all. ...

It is my desire that in this our time, by acknowledging the dignity of each human person, we can contribute to the rebirth of a universal aspiration to fraternity. Brotherhood between all men and women. Here we have a splendid secret that shows us how to dream and to turn our life into a wonderful adventure. No one can face life in isolation. ... We need a community that supports and helps us, in which we can help one another to keep looking ahead. How important it is to dream together. ... By ourselves, we risk seeing mirages, things that are not there. Dreams, on the other hand, are built together. Let us dream, then, as a single human family, as fellow travelers sharing the same flesh, as children of the same earth which is our common home, each of us bringing the richness of his or her beliefs and convictions, each of us with his or her own voice, brothers and sisters all.

I couldn’t help thinking that maybe, before we can dream together in the sense that Francis is urging us to within our common humanity and brotherhood/sisterhood, we need to undergo a basic transformation of consciousness regarding those who differ from us along so many dimensions. It is so easy to demonize those who differ from us in one way or another. But as Francis reminds us, we are called to be better than that.

Yes, we are called to be better than most of us are when we glare at the morning paper’s headlines or fume during the evening news. And in fact we can be better, more creative, more human, when we see the humanity that we share with the other. But how to be better remains the question. And that brings to my mind a book that was published many years ago – a book that was very important to me in my early career as a psychologist and may still have something to say to us all now.

The work I’m referring to is titled The Social Construction of Reality by two sociologists, Peter Berger and Thomas Luckmann (first published by Doubleday, 1966; republished by Anchor books, a division of Doubleday). It’s a complicated book, and obviously I can’t do it justice here. But in short, the authors argue that we subjectively construct and maintain our sense of reality in interaction and conversation with others. Let me share a paragraph with you from that book and then I’ll say why I think their writing may have something to contribute to Pope Francis’ call to engage with one another, creating dreams together of a better world. (See second photo.)

The most important vehicle of reality-maintenance is conversation ... [but] at the same time that conversation ongoingly maintains reality, it ongoingly modifies it. Items are dropped and added, weakening some sectors of what is still being taken for granted and reinforcing others. Thus the subjective reality of something that is never talked about comes to be shaky. It is one thing to engage in an embarrassing ... act. It is quite another to talk about it beforehand or afterwards. Conversely, conversation gives firm contours to items previously apprehended in a fleeting and unclear manner. One may have doubts about one’s religion; these doubts become real in a quite different way as one discusses them. One then “talks oneself into” these doubts; they are objectified as reality within one’s own consciousness ... conversation maintains reality by “talking through” various elements of experience and allocating them a definite place in the real world. (pp. 152-3)

A case in point: the murder of George Floyd. I think for many of us, not only witnessing his death but also talking about it widely among friends and others really proved to be a pivot point for many folks in our culture. A wake-up call. A change of consciousness regarding race relations in our country and, until now, a mostly unconscious taken-for-granted status quo that we suddenly saw for what it was. And through these conversations, many of us were fundamentally changed in – as Francis says – giving us a new vision of fraternity and social friendship ... not remaining at the level of words, but also of deeds.

Yes, this is our call – to see the reality of our common humanity with others. And this word from Francis – and in my life, a word from my friend Pete – reminds me of that fact. 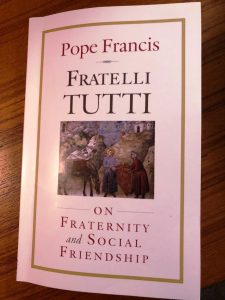 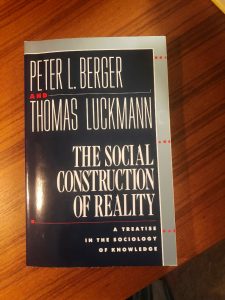 The Social Construction of Reality